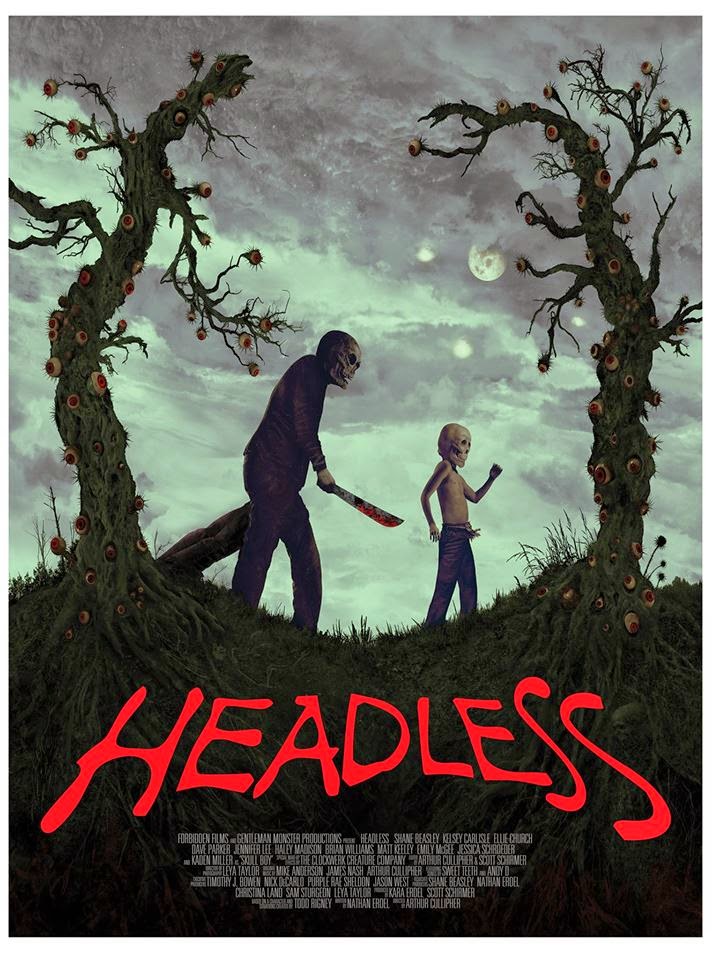 “Headless” is a film that is being dubbed as a lost slasher horror film from 1978. It was first noticed in the film “Found”, as one of the main characters in the film was obsessing over the film. The footage in the film within a film that made me wish “Headless” would become a feature. When I looking at what upcoming projects that director Scott Schirmer after watching “Found”, I was surprised to see that this was one of the films that he was producing. I knew then that I had to check this out.

The film is about a masked killer (Shane Beasley) who has no regard for anything. He goes on a violent spree that includes slaughter, eating his victims and necrophilia. But his past starts to haunt him in a way that he never imagines. This leads him to become more violently aggressive as he stalks a young woman and everyone one around her. Can his madness be stopped before he goes to a greater depth of insanity and violence than ever before? The film also stars Kelsey Carlisle, Ellie Church, Dave Parker, Kaden Miller, Jennifer Lee and Haley Madison.

One of the things that makes Arthur Cullipher’s direction work so well was the way that he makes the film’s tone very dark. From the way that he makes the film look like a lost seventies slasher film to how he uses the creepy music, it helped make the shocking violence feel horrific instead of it feeling all cartoonish like most films in this subgenre. It made the death scenes feel very shocking and uneasy to watch. Something that you need in a film like this to get over the fact that this is going to be bleak and horrific. The other thing that Cullipher does very well is to make sure he gets the performances that he needs to make this work. He does a very good job making sure that the performances had a serious tone to it. Whether it way that he directs his cast to the killer’s movements, everything had a dark tone to it. It helped make this film very shocking to watch.

Speaking of the acting, I thought it was very good. Shane Beasley does a very good job making his character very menacing. From the way that he moves to how he approaches his character, he makes his characters very terrifying. The films also has good performances from Kelsey Carlisle and Ellie Church. The dynamic between the two were very good and helped with the overall flow of the film. I hope to see both of them in more films in the near future.

The screenplay written by Nathan Erdel does a great job with character development and handling the violence. I liked the way he explores the main character. From the film’s flashback sequences to how it makes the character insane, it develops the character’s mental state on mind. If this didn’t have that kind of development, this would’ve felt like another slasher film. The other thing that I liked about Erdel's screenplay was the way it makes the violence shocking. From the way it was created on the page to the way it was executed, it had a level of shock value that leaves you feeling horrified and turning away from the screen. That’s what makes the violence in the film very effective.

This was a very shocking throwback grindhouse film that leaves you terrified. “Headless” is a shocking and terrifying film that will haunt you.