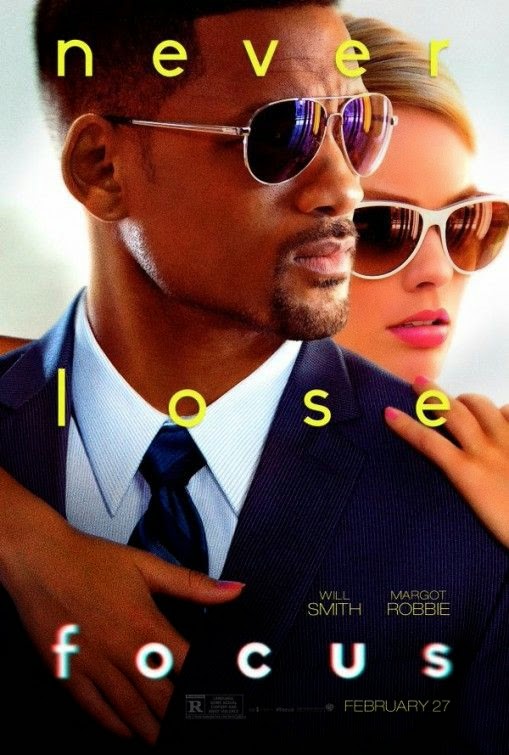 You can say what you want about Will Smith, but if you look at his track record, you have to admit to two things: the man makes good movies, and his hits far outnumber his misses. And Focus (written and directed by both Glenn Ficarra and John Requa) is another check in Smith's hit column.

Focus is a return to the confidant, charismatic, smooth-talking type of character Smith has played before in movies like Hitch, and it's a role he plays well. He's instantly likeable and believable, important qualities to get across considering he's playing a professional con man named Nicky Spurgeon. But if the old adage about a leading man being only as good as his costars holds any weight, well, Smith is doing just fine. Opposite him is his leading lady, the gorgeous Margot Robbie. She plays Jess Barrett, an amateur grifter dying to go pro who Nicky takes under his wing after she and a partner try to con him and bungle it horribly. Robbie is fairly engaging in her own right, and her and Smith have great chemistry as they play off each other through the film's twists and turns. They have a decent supporting cast around them as well, the most notable being Gerald McRaney (yes, Major Dad), who comes in halfway through the movie, gets the best dialogue of the entire script, and steals every scene he's in.

The plot is a straightforward one, very well written and capably directed: boy meets girl, boy falls for girl, boy loses girl, boy goes through hell trying to get her back. But because it's a movie about a bunch of con men, it's full of twists and turns, and the question "who's conning who?" is never far from the mind. The film's title is very on the nose as you need to focus, and if you do you might just catch the great end twist coming right before it hits. One of the most interesting aspects of the movie was seeing the mechanics of how they pull off the various cons; if any of them are things that actually happen (including putting a false front over an ATM to facilitate credit card theft), then in addition to being a really good drama, this is quite a scary movie as well.

As I mentioned above, Focus is a very smartly written, well directed movie that features a talented, charismatic cast working well together. All in all, I give it a solid 4 out of 5 stars.
at 10:14 AM
Labels: Focus, Margot Robbie, Reviews, Warner Brothers, Will Smith