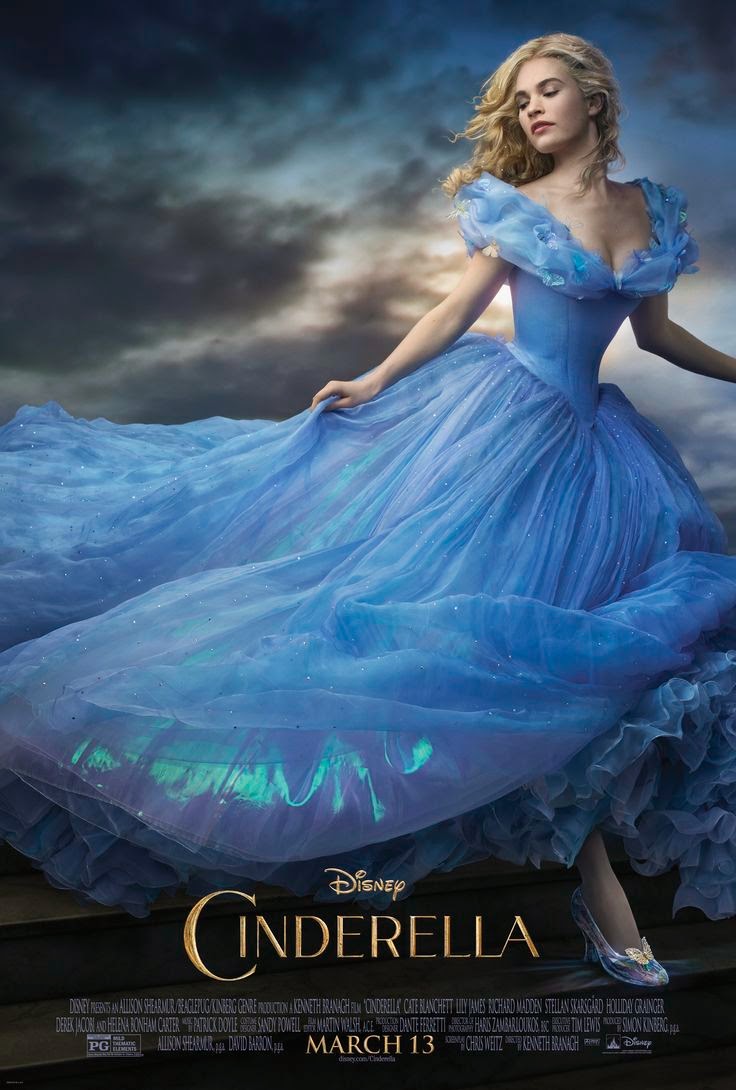 'CINDERELLA': Three Stars (Out of Five)

Disney's live-action remake of their classic 1950 animated kids' movie; which is a feature film telling of the beloved fairy tale, of the same name, by Charles Perrault. This new version was directed by Kenneth Branagh and written by Chris Weitz (who's also co-written and directed movies like'ABOUT A BOY'). It was made with a $95 million budget and also features actors like Lily James as Cinderella, Cate Blanchett as the Wicked Stepmother and Helena Bonham Carter as The Fairy Godmother. I think it's basically a well made film but it's also lacking any originality, whatsoever, and is kind of pointless.

After Ella (James) loses her mother (Hayley Atwell), to a tragic illness, her father (Ben Chaplin) decides to remarry. He marries the widow of a friend; that recently passed away. Her name is Lady Tremaine (Blanchett), and she has two daughters of her own; named Drisella (Sophie McShera) and Anastasia (Holliday Grainger). Although her new stepmother, and stepsisters, seem very unpleasant, and unkind, Ella still tries to remain happy and peaceful. Then her father passes away, on a business trip, and leaves the family without a source of income. Lady Tremaine fires all of the help and makes Ella take over all of the house work; while waiting on Lady Tremaine, and her daughters, hand and foot. The family also nicknames Ella 'Cinderella'. Cinderella is miserable, until she's paid a visit by her fairy godmother (Carter, who's never looked better).

I liked this story, a lot, when I was a kid; I also really enjoyed the Disney animated version of it. Watching it again, now, as an adult, in a live-action version, just seems like a waste of time. I found it entertaining, at first, but once the film got to about the midway point, I found myself to be very bored by it. I couldn't help but wonder what was the point of remaking it, in just a slightly different way, and watching it all again. I know the story by heart and this film has absolutely nothing new to offer it. It's well made, to a certain extent, but the jokes are pretty silly (even sillier than the cartoon version) and the acting is often overdone. For kids that haven't seen it before, it could be a fun time though.
at 4:34 PM
Labels: Cate Blanchett, Cinderella, Heleen Bonham Carter, Lilly James, Reviews, Walt Disney Pictures