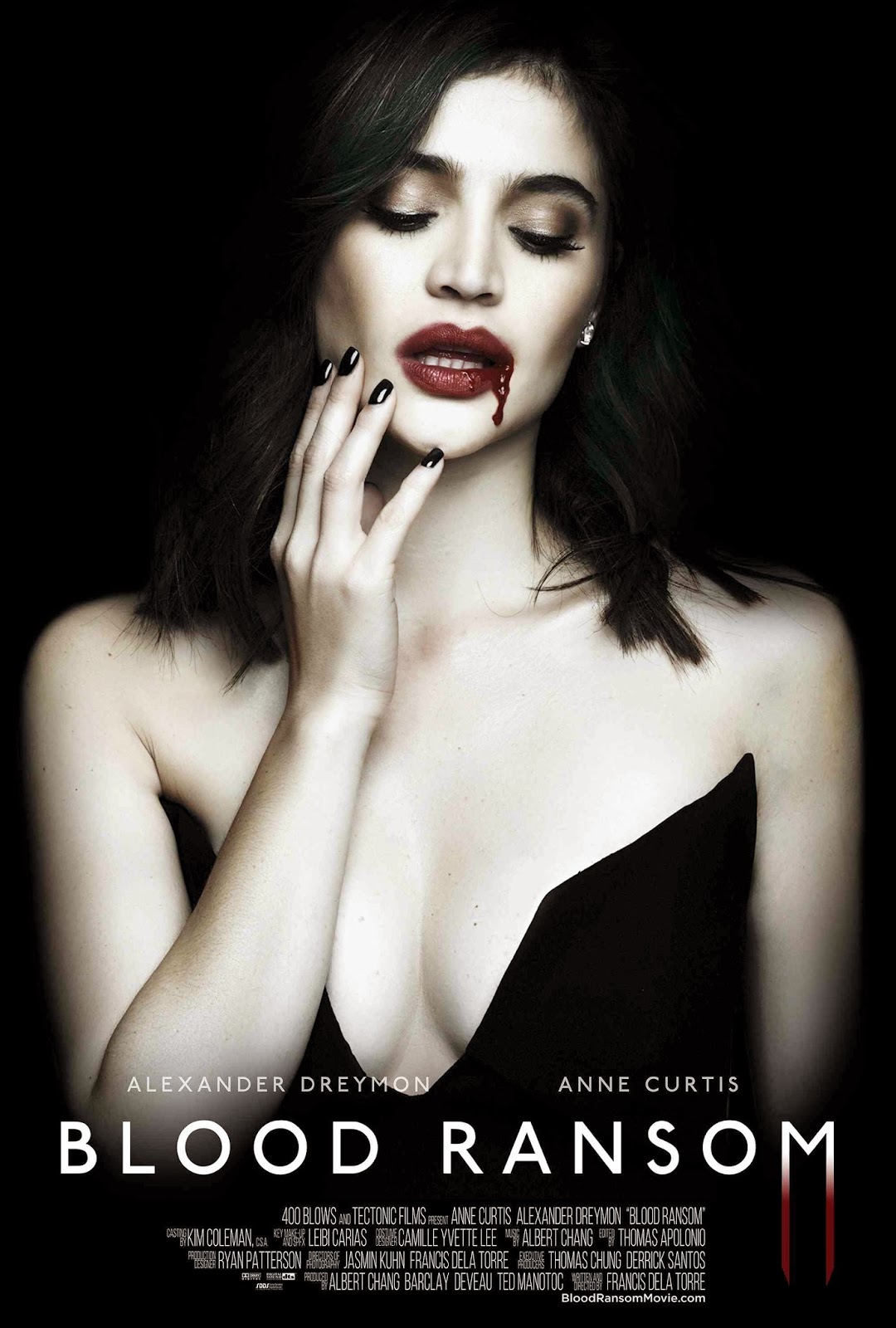 It was around Halloween season last year when I came across the trailer for “Blood Ransom”. It was one of those indie horror/fantasy films that gained my interest almost instantly because it had a love story that looked very dark and it was a vampire film. When those two elements come together, I’m always interested in that type of horror film.

The film follows, Crystal (Anne Curtis), a woman who recently turned into a vampire. She has only seven days to find someone to kill before she dies an agonizing death. She starts to have feelings for her driver (Alexander Dreymon) who she wants to kill. But her humanity sets in, as she starts to fall for him. But the only thing that threatens their relationship, is the fact the he doesn’t know that she’ll die unless she kills.

Going into this film, I was expecting this to be a very Gothic vampire film in the vain of “We Are the Night” and “Interview for A Vampire”. For the most part it goes a great job delivering on those aspects. But what makes this film very good was it delivers on the bloody violence while making the film feel like a dark fantasy with the way the romantic elements were used well.

One of the thing that make this film very good was writer/director Francis dela Torre’s direction. One of things that makes his direction stand out was the way the film looked from start to finish. From how the vampires look from the makeup to how each of the scenes was constructed, everything help gave this film its dark and dreary look and tone throughout. It really made this film feel like a true vampire film without needing the aspects that is associated with a Hollywood film.

The other thing that makes his direction good was the way that he gets the performances that he needs for this to work. Dela Torre does a very good job making sure his cast makes their performances fit the film’s tone. It’s crucial for this to happen and to be on a certain note so the tone of the film doesn’t go into a different direction.

Dela Torre also gets a very good performances from Anne Curtis, who is stunning as the film’s lead character. She does a great job making her character very dark throughout the film. Wither it was the way that she interacts with her costars to giving her character this Gothic tone, it makes the character stand out and keeps you interested in the character.

The screenplay which also written by dela Torre was different from what I expected but it was also good at the same time. What makes it good was the fact that he does a good job not leaving any questions or holes in the story. I liked, the way that he uses his prologue to the story up. By describing what happened in text before the film begin, it doesn’t give me the feeling that I’ve entered the film midway and wondering how it got to that point in the beginning. It was smart to do that as I’m not left wondering how the main character turned into a vampire. Also, I liked how this film had a film-noir feel with the detective’s subplot. It gave another perspective of the film through a character who’s isn’t in the middle of most of the action. Through the character’s narration to his relationship with the driver, it helped moved the story along and it made the character interesting and have a purpose in this film.

The film also does a very good job blending in various elements in the film’s story. It’s what helped me become very engaged with this film. Whether it’s the bloody violence, to the dark aspects, to the romantic elements, dela Torre does a very good job making these elements work with the film’s story. It’s what makes this screenplay good and Gothic.

I hope this film is able to find some sort of distribution here in the U.S. I truly think vampire fans will love this film for all the gothic and romantic elements. “Blood Ransom” is a very bloody and Gothic film that delivers on the gore and the romance.

There’s no U.S. release plans as of this posting. For more information on the film, you can visit the film’s official website at: http://www.bloodransommovie.com/