"The Color of Time" Review by Tim Hellman 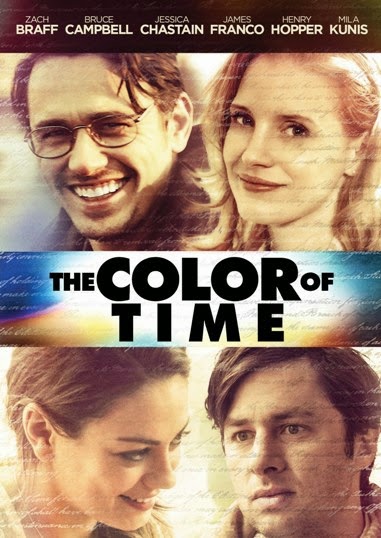 'THE COLOR OF TIME': Three and a Half Stars (Out of Five)

Biographical drama flick, based on the life of Pulitzer Prize winning poet C.K. Williams; told through flashbacks and narrated by the words of his famous poems. The movie stars James Franco (who also served as a producer on the film), Henry Hopper, Jordan March and Zachary Unger; as Williams, in various stages of his life. It also features celebrities like Mila Kunis, Jessica Chastain, Zach Braff and Bruce Campbell; in supporting roles (It might be interesting to note that Franco, Kunis, Braff and Campbell also all worked together on the 2013 blockbuster 'OZ THE GREAT AND POWERFUL', which was probably filming around the same time). It was written and directed by twelve New York University film students; including Edna Luise Biesold, Sarah-Violet Bliss, Gabrielle Demeestere, Alexis Gambis, Shruti Ganguly, Brooke Goldfinch, Shripiya Mahesh, Pamela Romanowsky, Bruce Thierry Cheung, Tine Thomasen, Virginia Urreiztieta and Omar Zuniga Hidalgo. I found the movie to be very beautiful to watch, and pretty moving at times, but ultimately unfulfilling.

The film is an adaptation of 11 of C.K. Williams' most famous poems. Each poem is used to tell a pivotal story in Williams' life; from the 1940s to the early 1980s. Franco plays Williams at age 40; when he's married, to Catherine (Kunis), and has two children. As he prepares for a reading, in New York City the next day, C.K. sits down to write new poems. While doing so, he recollects on memories from his past. His memories tell stories of his childhood, teen years and current marriage. Most of his flashbacks deal with important women, like his mother (Chastain), from his past life.

The scenery is breathtaking and some of the imagery is moving; and also disturbingly haunting, as well. We never get to know the characters, in the flashbacks, very well though; including Williams. So while the movie is always stunning to look at, and feels pretty emotional at times, it doesn't leave you with very much to think about, when it's over. It is worth seeing though, just for it's gorgeous visuals alone, and the performances are all more than decent. The film kind of reminds me of one of Terrence Malick's lesser movies; especially while watching Chastain, as a mother in the 1940s. I think these filmmakers have a lot of promise, and will do much better films in the future!
at 7:38 PM
Labels: Anchor Bay Films, Bruce Campbell, James Franco, Jessica Chastain, Mila Kunis, Reviews, The Color of Time, Zach Braff