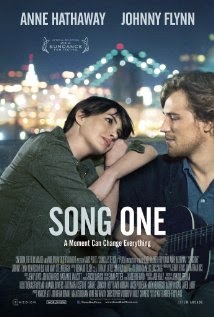 Song One is a funny little movie. Not "ha ha" funny, although it has its moments, but more "weird" funny. Written and directed by Kate Barker-Froyland, her first full-length credit in either category, Song One is a musical that isn't a musical. The characters don't break into Rent-like musical numbers, although Henry Ellis (Ben Rosenfield, whose acting ability I can't quite critique for reasons that will become clear) does sing in the movie's opening and Johnny Flynn's singer/songwriter character James Forrester does perform onstage and off a few times, and even Henry's sister Franny (Anne Hathaway) sings a line or two. No, the movie is a musical more in the way music is an ever present, undeniable force in the film, right down to the movie's core.

After a cold open in which Henry is hit by a car, Franny, a photographer overseas, receives a call from her mother Karen (Mary Steenburgen, the movie's only real supporting cast, who does a terrific job as a frantically worrying, overstressed, occasionally drunk mom), telling her what happened. She runs home and, suffering with guilt over not talking to Henry since a fight they had about him leaving college to pursue music, begins a quest to bring Henry out of his coma through the senses, mostly the sense he loves most: sound. What follows is a tour through the musical heart of hipster Brooklyn, complete with performances at local clubs by local musicians. Along the way, Franny meets James, Henry's favorite musician, who finds his way to Henry's bedside, playing for him in an attempt to bring him out of his coma. The film's love story plays out from there, with Hathaway as the center; she's good, as she always is, even magnetic at times, but she's been much better. Johnny Flynn, on the other hand, is bad. He plays his part very tentatively, very weakly. It works fine when he first meets Franny and is brought into a weird situation, but as their relationship develops he keeps playing it that way, coming off as a cold fish that belies the heat we're supposed to be seeing.

It's possible, of course, that Flynn's performance was less his own fault and more a directorial choice. As both a writer and director, Barker-Froyland shows promise, but still has flaws. The directing of the movie is, for the most part, uninspired, but it's very well edited. The writing shows sparks in places, but the story itself ends rather limply. I did enjoy the music, though. If everything came together, Song One has the potential to be a great movie, but instead it just manages two stars out of five.
at 8:06 PM
Labels: Anne Hathaway, Cinedigm, Reviews, Song One, The Film Arcade