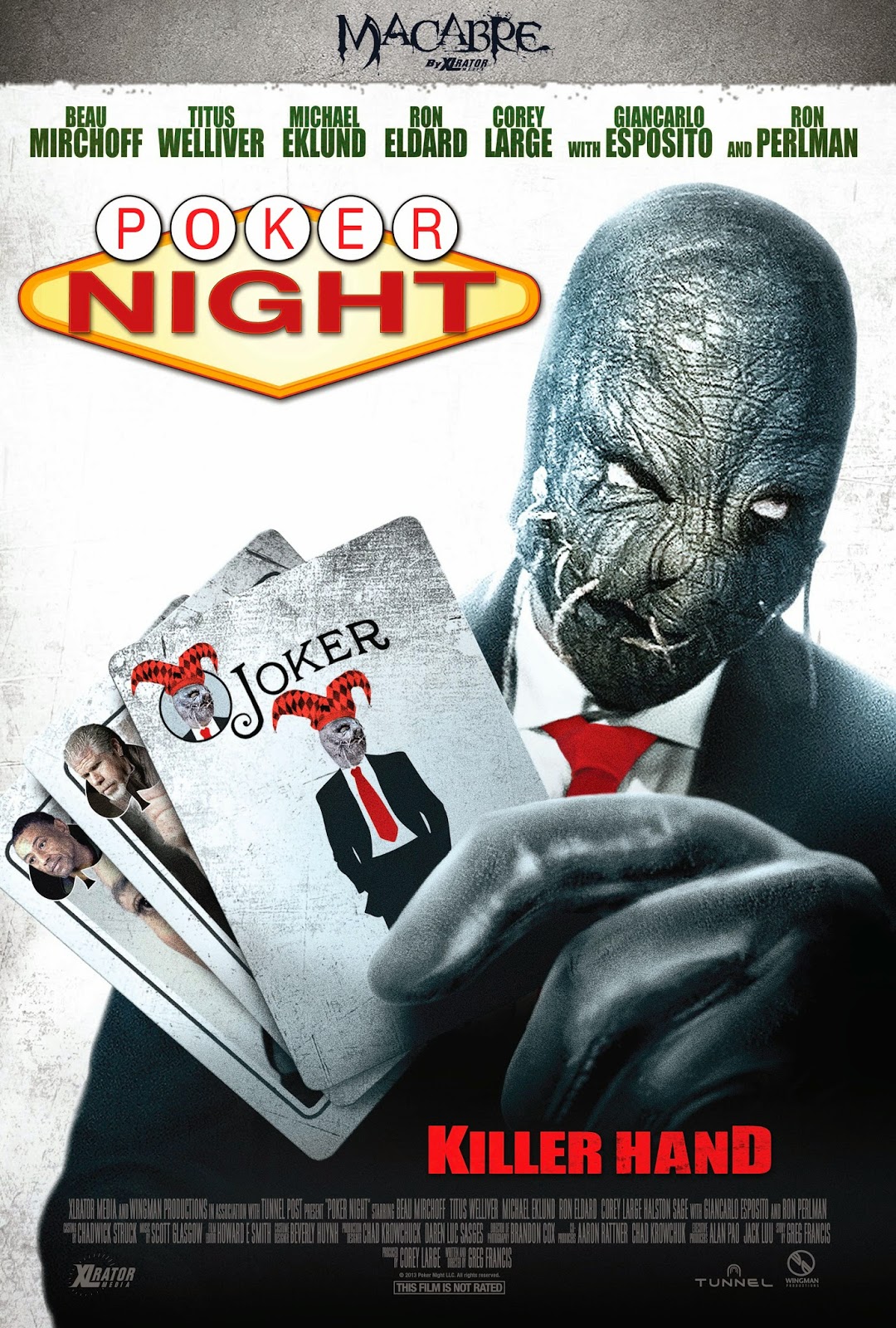 “Poker Night” is a film that got my interest almost instantly after seeing the cast list for the film. It also helped that I liked the trailer enough that it warranted me wanting to check this film out.

The film is about a detective (Beau Mirchoff) who gets himself captured by a deranged madman. He’s awakens to find himself tied up and caught in the middle of a madman’s game. In order to find a way to outsmart him, he has to rely on his experiences that he learned while at a poker game filled with a group of senior and retired detectives. Can he find a way to take all that he learned from those detectives and find a way to outsmart the madman? “Poker Night” also stars Ron Perlman, Giancarlo Esposito, Titus Welliver, Michael Eklund and Ron Eldard.

Going into “Poker Night”, I thought this film would play out like a conventional thriller that you would normally see in a direct to home video release. After watching the first twenty minutes, I knew that this film going to be completely different to other thrillers and I thought I was going to hate it. But surprisingly, this was a very good film.

One of the reasons for that was writer/director Greg Francis direction. His direction does a very good job with the way the film was shot. The images had a very dark and twisted feel to it. By doing it that with a film like this, it allows the scenes to stand out. When that happens, it usually keeps you’re interested with the film. It did for me and made the film entertaining. The other that Francis does well with the direction was to make the performances work so well. He does a very good job making sure the performance aspects work well the film’s dark screenplay. It made the performances entertaining and frightening to watch.

Francis’ screenplay worked well with me for the most part. I liked how each of the stories at the game stand out. Whether it’s the way that he constructs those scenes to how he makes every one of those stories different from one another, it made them interesting and not going in different direction that you lose track of what’s going on in the present. It’s what ultimately made me like this film. The other thing that I liked about the screenplay was the fact that it develops its two main characters. Francis does a good job making sure that both of the film’s main characters are fully developed that you know something about the characters. It plays well as it makes them interesting and you’re interested in what going on.

If there was one problem that I had with this film was the fact that it at times this felt like an anthology film than a straight up thriller. The reason it felt that way was the fact that the film has many side stories with all of the detectives at the poker game. But at least the stories severed a purpose, as it was a part of the character’s state mind as heard in the voiceovers. The whole anthology feel is only a minor grip I have with this screenplay.