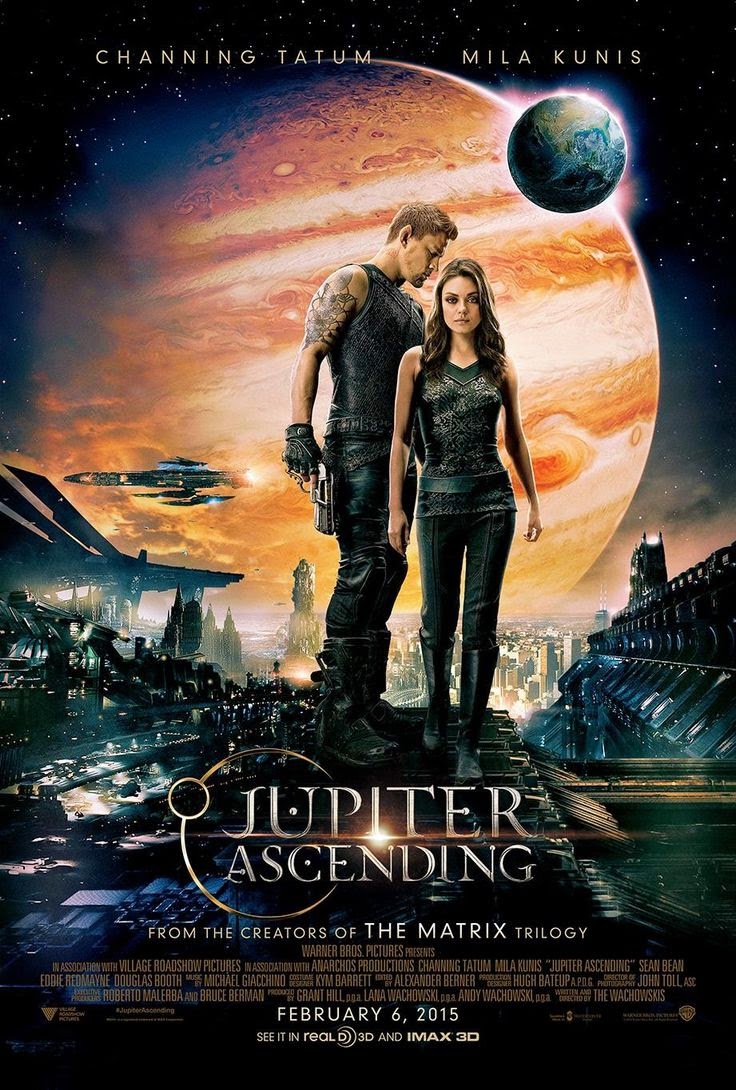 'JUPITER ASCENDING': Four and a Half Stars (Out of Five)

The new big budget sci-fi epic from the Wachowski siblings. It stars Mila Kunis as a poor caretaker and Channing Tatum as a genetically engineered ex-military warrior, who team up to stop alien royalty from taking over the planet. Andy and Lana Wachowski wrote, co-produced and directed the movie; which also stars Eddie Redmayne, Sean Bean, Douglas Booth and Tuppence Middleton. If you grew up on 80s space opera, like I did, you're almost sure to love this movie (despite what the critics say).

The plot revolves around a rich alien family, called the 'House of Abrasax', who harvest people from other planets to create a youth serum; which allows them to live forever. When their mother dies, the Abrasax siblings fight over her inheritance; with Earth being the most prized possession. A poor housekeeper on Earth, named Jupiter Jones (Kunis), is destined to replace the Abrasax siblings, as Queen of Earth, due to her genetic structure. So she's targeted to be killed, by the powerful alien family, and it's up to a genetically engineered hunter, named Caine Wise (Tatum), to save her (and the planet).

The film is full of spectacular visuals, cleverly crafted space battles and intense chase sequences. I was most impressed with the very detailed, and elaborate, sci-fi universe; that the Wachowskis created for this movie. For me it's very nostalgic and highly reminiscent of the classic sci-fi action movies I grew up on (like 'STAR WARS' and 'THE LAST STARFIGHTER'); it's not quite up to par with George Lucas's original beloved trilogy, but it's at least in the same league as it's prequels. I know the movie is a bomb, financially speaking, but I really think it could become a popular cult classic and possibly spawn sequels, in the distant future, if enough fans demand it. I'd hate to see the Wachowskis stop getting financing for movies like this, because I think they're some of the best in the business at it!
at 6:36 PM
Labels: Channing Tatum, Eddie Redmayme, Jupiter Ascending, Mila Kunis, Reviews, Warner Brothers