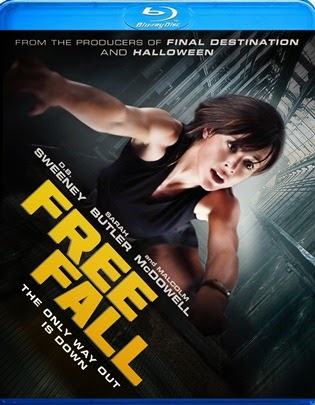 Low-budget B action flick about the career driven employee of a corrupt L.A. business, who uncovers incriminating company secrets and is hunted by an assassin; in order to silence her. The chase becomes more interesting when she becomes trapped in a company elevator. The film stars Sarah Butler (of 'I SPIT ON YOUR GRAVE' fame), D.B. Sweeney, Ian Gomez and Malcolm McDowell. It was directed by veteran horror movie producer, turned first time feature film director, Malek Akkad and written by Dwayne Alexander Smith. I found the silly thriller to be slightly entertaining but mostly dull and forgettable.

Butler plays Jane Porter, an ambitious young employee of Gault Enterprises. Her boyfriend, Ray (Jayson Blair), wants her to spend less time at work and more time with him; but Jane is obsessed with her job. Her world is thrown upside down when a beloved coworker shows up dead, from an apparent suicide. Jane finds a thumb drive containing secret information about her boss, CEO Thaddeus Gault (McDowell), that most likely got her coworker killed. When another employee, Jane's supervisor Ronald Taft (Gomez), learns of her discovery, he calls in the company's hit-man, Frank (Sweeney), to clean up the mess. Things come to a standstill when Jane gets stuck on an elevator and Frank can't reach her.

The movie is pretty cheesy and filled with laughable suspense and bad acting. It's one saving grace is D.B. Sweeney; he's a delight to watch and he seems to be having a lot of fun playing this psycho killer. McDowell and Gomez are both good too but they're parts are too small. Butler is neither believable or likable, in her role. Most of all the film is just boring and uneventful; it completely lacks any originality or cleverness, at all. It's completely a waste of time; except for when Sweeney is on screen, of course.
at 7:00 PM
Labels: Anchor Bay Entertainment, Free Fall, Malcolm McDowell, Reviews