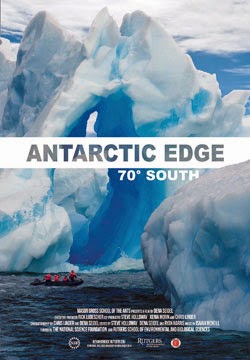 First Run Features recently send us information that they've recently entered into a multi-film distribution agreement with the Rutgers Center for Digital Filmmaking. The first film to be released under the agreement is "Antarctic Edge: 70° South". That film will hit theaters in limited release on 4/17.

Two other titles that will follow "Antarctic Edge: 70° South" include "Atlantic Crossing: A Robot's Daring Mission" and The War After", No release plans for those films were announced at this time.

First Run Features is proud to announce a multi-film distribution agreement with the Rutgers Center for Digital Filmmaking. The first title scheduled for release is the new feature documentary Antarctic Edge: 70° South, which will launch in theaters beginning on April 17, 2015. Two more titles, Atlantic Crossing: A Robot's Daring Mission and The War After will follow.

Dena Seidel, Director of both the Center and Antarctic Edge, said, "I am very excited about this collaboration. First Run Features has a long and successful history of bringing important documentaries to the larger public. I'm thrilled our Rutgers Film Center is working with First Run on the distribution of our three Rutgers-produced films, especially as we launch our new inter-disciplinary Bachelors of Fine Arts in Digital Filmmaking."

"As a Rutgers alum, I am very proud to distribute such professionally made films produced from the Rutgers Center for Digital Filmmaking," commented Seymour Wishman, President of First Run Features. "The ability to utilize the resources of various departments of the University affords a unique opportunity to create documentaries with unmatched expertise. Dena Seidel's extraordinary skill and experience both to direct and produce compelling nonfiction narratives with her students and then use that learning model as the basis for the university's first film production program is outstanding."

Antarctic Edge: 70° South is a thrilling journey to the bottom of the Earth alongside a team of dedicated scientists. In the wake of devastating climate events like Superstorm Sandy and Hurricane Katrina, oceanographer Oscar Schofield teams up with a group of world-class researchers in a race to understand climate change in the fastest winter-warming place on earth: the West Antarctic Peninsula. For more than 20 years, these scientists have dedicated their lives to studying the Peninsula's rapid change as part of the National Science Foundation's Long-Term Ecological Research Project.

Filmed in the world's most perilous environment, Antarctic Edge brings to us the stunning landscapes and seascapes of Earth's southern polar region, revealing the harsh conditions and substantial challenges that scientists must endure for months at a time. While navigating through 60-foot waves and dangerous icebergs, the film follows them as they voyage south to the rugged, inhospitable Charcot Island, where they plan to study the fragile and rapidly declining Adelie Penguin. For Schofield and his crew, these birds are the greatest indicator of climate change and a harbinger of what is to come.

Antarctic Edge: 70° South was made in a collaboration between the Rutgers University Film Bureau and the Rutgers Institute for Marine and Coastal Sciences. A unique inter-disciplinary educational project bridging art, science and storytelling, Antarctic Edge was funded in part by the National Science Foundation.

Atlantic Crossing is a feature length documentary about RU27, the first autonomous underwater robot to cross the Atlantic Ocean, and the passionate scientists behind the mission. The War After is a powerful one-hour documentary featuring ten U.S veterans transitioning from active duty to the unexpected challenges of civilian life. In the wake of the enormous attention generated by Clint Eastwood's American Sniper, The War After offers a real-life look at post-war life for returning vets.

In addition to launching Antarctic Edge: 70° South in theaters, First Run will also release all three titles into the educational, non-theatrical, television and cable, and home entertainment markets.