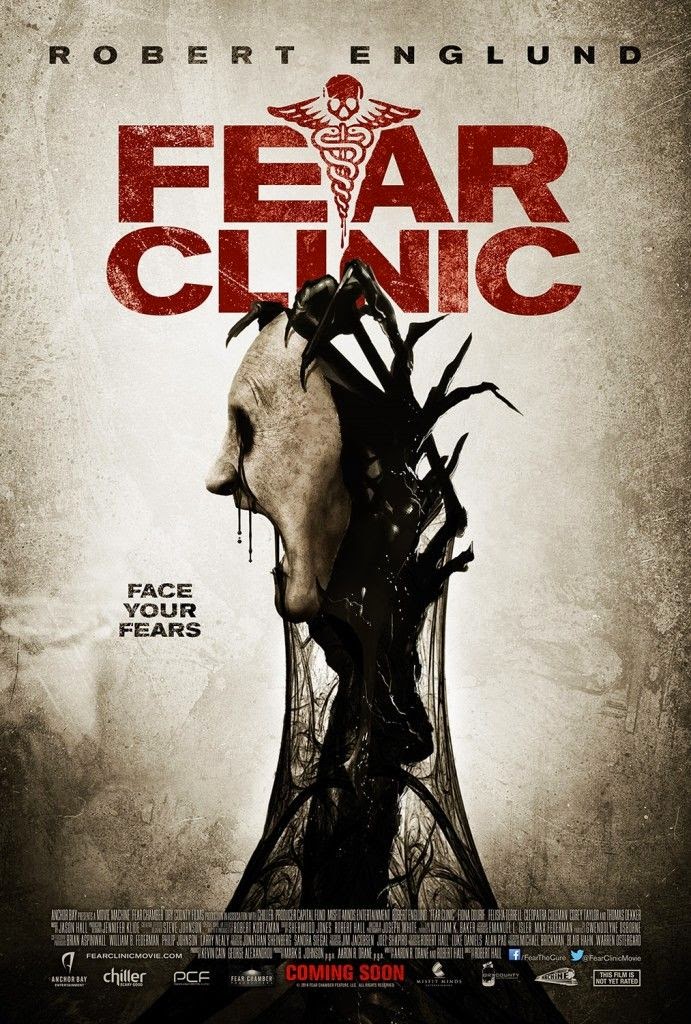 “Fear Clinic is a film that I’ve been looking forward to for a while since first hearing about this project. What drew me to waiting to see this film right away was the cast and the fact that this is Robert J Hall’s follow up film to “Laid to Rest 2: Chromeskull”.

The film follows Dr. Andover (Robert Englund) who uses a fear chamber to help patients overcome their fears. When one of his patients dies in the chamber, he gives up his research until former patients start returning to the clinic after their fears start coming back after a horrific shooting a year ago. He soon begins to realize something is wrong with the chamber as everyone’s fears is feeding something that is looking are come out in the real world and wreak havoc. Fiona Douff (Curse of Chucky) Thomas Dekker (Laid to Rest 2: Chromeskull) and Corey Taylor (Slipknot and Stone Sour lead singer) costars.

I was very surprised that I liked this film a lot considering this film wasn’t like Robert J Hall’s “Laid to Rest” films at all in tone. Those were intense slasher films that horror fans should check out. But this film is very different from those films, as it has more of a dark serious tone like his first film “Lightning Bug”. In fact, I’ll go out on the limb and say that this is Robert J. Hall’s best film yet.

One of the reasons that I like this film was the way it was directed. Hall does a very good job making sure that all of the scenes had an intense or gloomy feel to it. From the way that he and his crew chose the film’s location to the way the effects were used in the film, everything helped the horror elements work to perfection. It made the film work very well as a whole. The other thing that I liked about his direction was the acting. Hall does a very good job making sure that the acting fits the film’s very dark tone. I liked how, the way the performances kept my interested considering that most of the horrific action doesn’t take place until the last third of the film. What Robert J Hall does well is to make his cast become interested with the film’s material and making sure their performances have this dark dreary tone. By having that, it helps with the development of the characters onscreen.

The screenplay written by Hall and Arron Drane was very good. One of the things that I liked about this screenplay was the fact that they did a great job with the way they develop and build their characters throughout the film. The writers did a very good job making sure each of the main characters had layers to them. It made the characters very interesting and helped the film’s story work at a very good level. By having this kind of development, it helped develop each of the characters and makes the film’s twist work very well with the action. The other thing that makes this good was the way the horror elements works very on psychological level. I liked how both of the writers make sure that all of the phobias that were used in the screenplay had a horrifying feel to it. It led to some to some very horrifying scenes and keeps you on edge.

Sadly, there’s only a behind the scenes featurette on this disc. It features interviews from the cast and crew that worked on the film. A good featurette that explain the production of the film and the process of how it started as web series to how the film was made.

I wished this had more extras here including the complete web series and the Stone Sour music video for “The Dark” which is featured in the film’s end credits. Horror fans should give this film a chance as this is the first entertaining horror release of the year. With its great performances from Robert Englund and Fiona Douff to Robert J Hall’s directing, “Fear Clinic” is sure to creep you out.

“Fear Clinic” is available on DVD and VOD at retail outlets everywhere and on Blu-Ray exclusively at Best Buy.