"Digging Up the Marrow" Review - Written by Anthony T 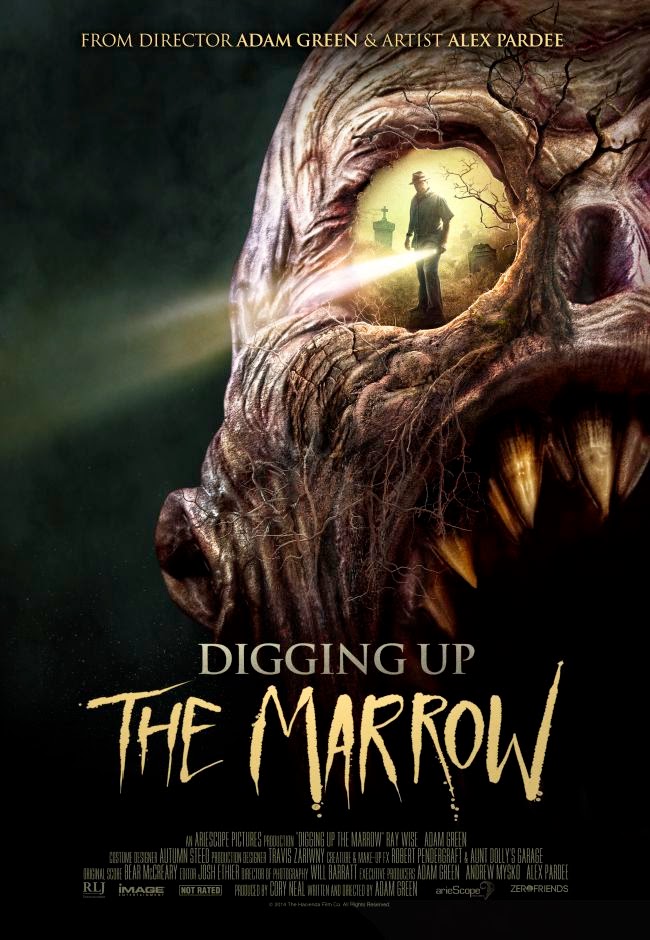 When I first heard that Adam Green was having a new film, I was excited as I thought it was going to be like the “Hatchet” films or “Holliston” because he also stars in this. But when I started to read the synopsis, I could tell it wasn’t going to be a fun time like those two are. Instead, “Digging up the Marrow” looked more like his more serious films like “Frozen” and “Spiral”. Still I wanted to check this because his serious films tend to be his best ones.

The faux documentary follows Green as he is contacted by a mysterious man who believes that monsters are real and hide in the woods. Along with his Cinematographer Will Barrett, the two set to interview him and discover that they might be some truth to this. As they get closer to the truth, they don’t know what to believe as things about the mysterious man start coming to light and something or someone might be haunting them during their search for the truth.

“Digging up the Marrow” was for the most part a departure from Adam Green’s previous films. The film had a different feel compared to most of his films. Still, this is one of Adam Green’s best films, as I would put that up there with his best film “Frozen”.

One of thing that I enjoyed about this film was Green’s direction was that he takes a different approach in the way he has this film filmed with its faux documentary style. It helped make the film have its realistic tone to it that is needed if you’re trying to have it feel like a documentary with interviews with real people and realistic action. It made some of the scenes work well with the style it was going for.

The other thing that Green does very well was the way that he directs the acting. The acting was good, as it kept things interesting especially when it’s just Green and Will Barratt talking. You had the typical Adam Green performance that see on “Holliston”, but it works very well here as you needed a character to have a personality to keep you interested. It helped keep me interested as he tries to find proof of monsters. But the main star of the film is Ray Wise. He was great in this film. What I liked about the performance was the way he makes his character very dark. This didn’t feel like the typical Ray Wise performance that you would see from him. From the way that he talks to how he approach the character, everything had a dark feel to it. It made his character standout and very interesting to watch.

This is one of those VOD releases that you should find a way to check out, as this is the first film this year that’s very good. “Digging up the Marrow” is a very fascinating film that is both entertaining and scary. This will make you believe that monsters can be truly scary.