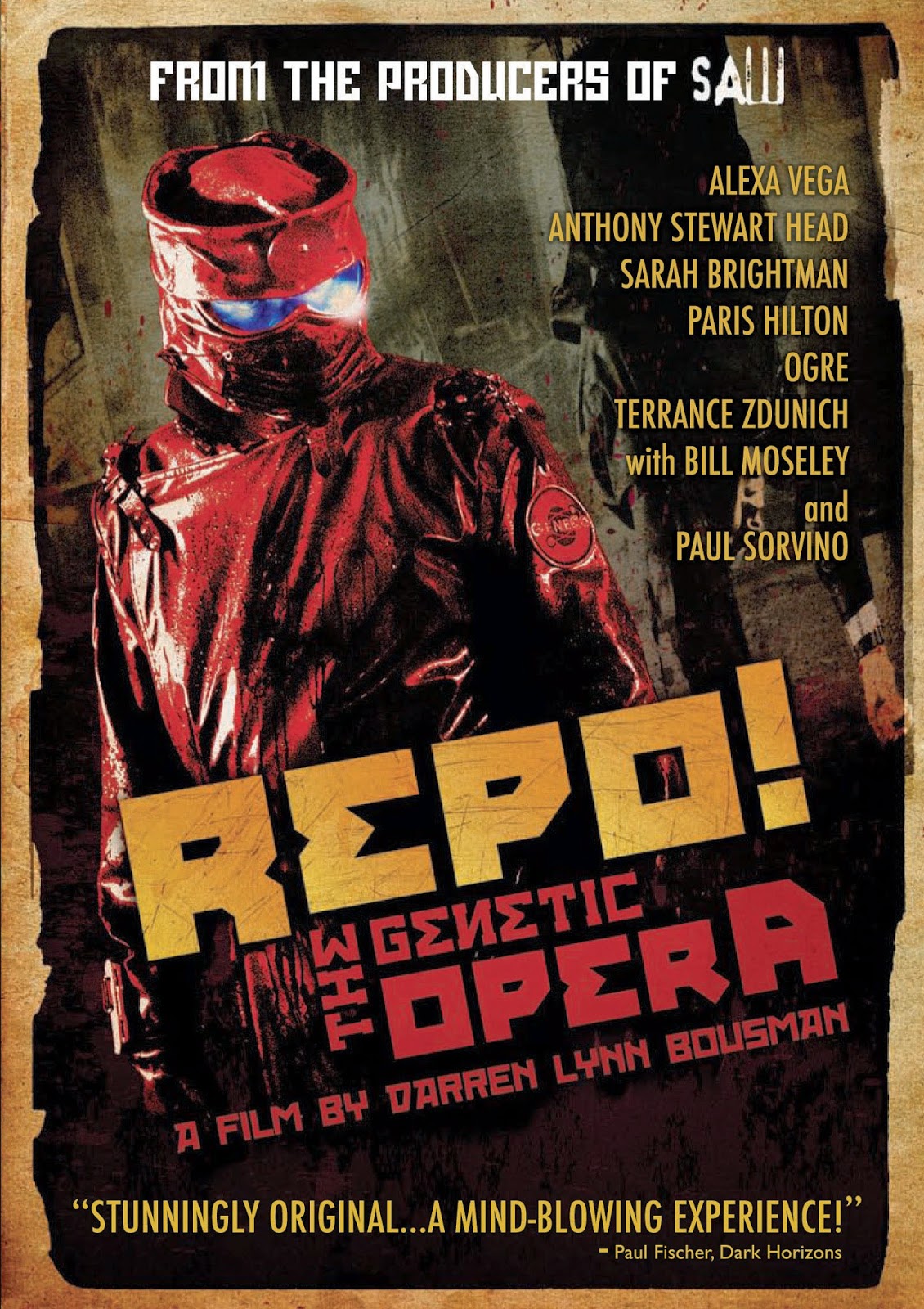 Welcome to another edition of Anthony T’s #TBT. This week I decided to revist an old DVD review of a cult classic. When I think what are my favorite musically. One will always be “The Rocky Horror Picture Show” after loving since seeing it in 2012, but my number two favorite musical is “Repo: The Genetic Opera”. I remember back in 2008 when I first heard about the film. I couldn’t wait to see it in theaters. But that never happened, as it had a very limited theatrical release. I finally got my chance to watch and review the film in the beginning of 2009 when the DVD release of the film came out. After watching it, I felt like I just watched a film that felt something special. Fast forward six years later, I still love and enjoy this film to this day as I have the same love for this film, as I do for “The Rocky Horror Picture Show”. Without further ado, here is my 2009 review of “Repo” The Genetic Opera”.

Please note: This is film review portion of the DVD review. Repost from 1/24/09 DVD review with minor changes.

Repo! The Genetic Opera" is a film that have I’ve been personally been looking forward to as a fan of the horror genre. But what made me more curious about the film, when Lionsgate decided to release this film on a few screens back in November. I couldn’t understand why because it’s received the kind of positive buzz on the Internet from a lot of major horror sites like Dread Central and Bloody Disgusting. The film was also gaining a cult following online before the movie is even released.

The film takes place in the future where there is a worldwide epidemic of organ failure, until a biotech company finds a cure. But it’s comes at a price and if you don’t pay, your body parts and organ can be reposed by the repo man.

The film follows Shilo Wallace (Alexis Vega), a young girl who is forced to stay at her father in a gothic house after inheriting a genetic disease at childbirth. Her father Nathan Wallace (Anthony Steward Head) is very protective and is hiding a dark and murderous secret from her. She then begins to discover something from her mother’s past when Rotti Largo (Paul Sorvino) offers her the chance to be cured from her disease. She will then journey out of the house to find her cure. During that journey, she runs into formerly blind opera singer (Sarah Brightman) that wants out of her contract with Genco after signing her life away to see again. While Shilo is away, Nathan is struggling with demons of his own while doing the bidding of his boss Rotti Largo. Largo is also having problems as he’s diagnosed with terminal cancer and can’t find a worth heir to his throne, as all of his three children are failures to him, because one is a murderer (Bill Moseley), the other is a rapist (Ogre from “Skinny Puppies"), and their sister (Paris Hilton) is hooked on a drug known as Zydrate and is addicted to surgery. Soon all of these characters will collide at Genco’s opera, where every secret and power struggled will be revealed as it’s sure to be one fun and bloody time at the opera tonight.

There are some films that you get a sense that you’ve just seen something special after seeing it for the first time. The last time that I’ve felt this way was back in early 2007, when I saw “Pan's Labyrinth" for the first time on the big screen. On that occasion, it was the fairy tale like atmosphere that made me coming out of theater thinking that was special. Fast forward to today after watching “Repo!: The Genetic Opera”, I felt that same way after watching it. The reason that I felt that way after seeing it was the vision and the originality the film has and it was a shame that it didn’t get a proper theatrical release that it deserves.

Darren Lynn Bousman’s direction was great. He achieves in making the direction good, by making the film feel frightening and its dark visionary look at the future. The atmosphere fits with the dark subject matter that this film tackles. Another thing that Bousman does very well was the way he tackles the back stories by using comic bookish storyboards and various types of film to give background on the main characters. It makes it very stylish and makes you pay attention to the character’s background. It’s very acceptable here, as this is a rock opera not a movie. Bousman also directs the musical sequences very well. I liked how the music sequences were non-stop as the film never slows down, which makes this very entertaining. The acting was great, as he makes sure that the performances fit the tone to what song each actor is singing. This is usually a hard thing, as the actors are singing the songs before and having to match the same intensity when lip-sync it on camera. Bousman achieves that very well, as it has the energy that cult-classics are made off.

The screenplay written by Darren Smith and Terrance Zdunich was very good. One of things that the screenwriters did very well was to make the music non-stop. They did that because they wanted the viewer to come out of the film and say that they saw an event, not a movie. The songs were also great. I liked how all the songs made sense with the film’s main plotline. It makes you very invested with the story. Their character development was very good, as they took their time and develop them in a way that you become interested with the characters. This helps makes these characters so loved by fans and devotees of this film.

“Repo! The Genetic Opera” blends elements of such classical films like “Blade Runner” and “The Rocky Horror Picture Show” into a dark and gothic rock opera that is sure to be talked about for years to come. Please support this film on DVD or Blu-Ray, so we can get the special edition and director’s cut that lovers of the film truly deserved.