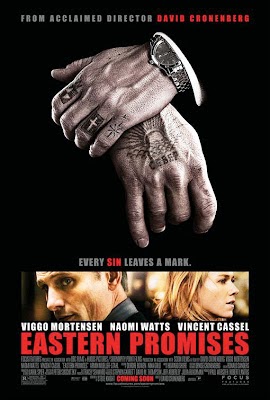 Welcome to another edition of Anthony T’s #TBT. Before I get to this review, I just want to let you know that this column is going to take a two week break with it returning on March 19th. With that said, this week since David Cronenberg’s latest film “Maps to the Stars” will be hitting theaters in limited release, I decided to go back to 2008 at the beginning of Film-Arcade.net where I reviewed his film “Eastern Promises” during Oscar season. Without further ado, here’s my January 2008 review of “Eastern Promises”.

“Eastern Promises” is the latest film from cult director David Cronenberg. This film re-teams him with actor Viggo Mortensen (The Lord of the Rings trilogy) who also stared in Cronenberg’s last film “A History of Violence”.

In “Eastern Promises”, Mortensen plays a notorious low-key gangster/driver named Nikolai Luzhin. He finds out that his existence has been compromised, when a woman (Naomi Watts) inadvertently discovers a notebook from a dead girl. She finds information that’s incriminates a member of his family and threatens his existence. Soon, his life is threatened as he begins to fear that certain people want him dead. This leads him to not trust anyone even his own family. This will lead to murder, deceit and retribution for all those involved. Vincent Cassel (Derailed, Oceans Twelve) and Armin Mueller-Stahl (Shine, The X Files movie) co-star in the film.

“Eastern Promises” is a very dark and gritty gangster film that may not be for everyone. I’m really starting to become a Cronenberg fan. He seemed to have gotten away from his trademark weirdness that’s been seen in most of his films like Crash (1996), Naked Lunch, and Videodrome. I liked how he captures the dark atmosphere here, as it goes very well with the subject matter here. Like in A History of Violence, he manages to have the gangsters be creepy villainous characters which is great and is not seen in many films of this genre.

What also makes a great gritty gangster film is the acting and it was great here. I thought Viggo Mortensen was perfect for this role, as he deserved his Oscar nomination. It brought that creepy edge to the role, which made it perfect. At times, his character reminded me of Ed Harris in “A History of Violence”. He’s up there with Guy Pearce, as one of Hollywood’s most underrated actors. Naomi Watts was also very good, as she seemed to capture the innocents of this character, who’s caught in the middle of this.

The screenplay was written by Steven Knight who was nominated for Oscar in 2004 for “Dirty Pretty Things”. I thought his screenplay was disciplined, as he didn’t rush the story along or try to move it along to the point where you don’t understand anything. He takes his time developing the characters and inserting the back-story of the dead girl within the film. This helps with its grittiness and plays a vital role here. Also, I’m very surprised that the filmmakers got away with its R rating as there was a fight in the shower with a naked Mortensen, near the end of the film. Usually that’s something that the rating board frowns upon.

“Eastern Promises” is a very gloomy gangster film that Cronenberg and gangster film fans will have the benefit of watching one of the best films of 2007.