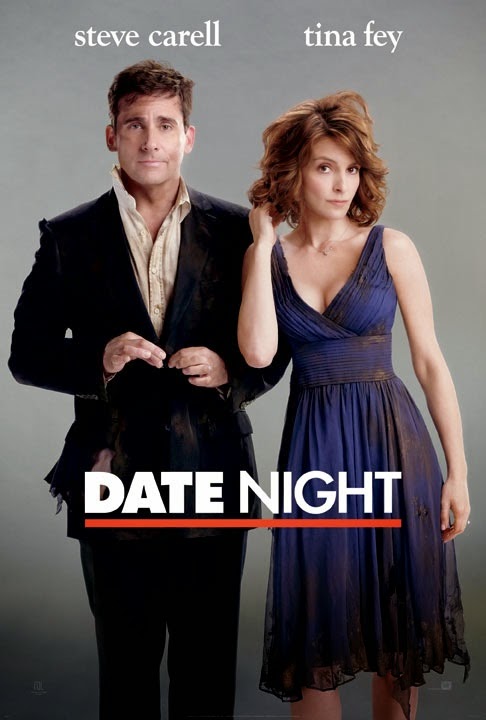 With Valentine’s Day around the corner, I decided this week to revisit my “Date Night” review that I did back in April of 2010. I may make constant reference to another film called “The Bounty Hunter” which I reviewed and hated around the same time that this film came out. Without further ado, here is my review of the romantic comedy “Date Night”.

Yes, I’m reviewing yet another romantic comedy, after having to deal with the humorless film known as “The Bounty Hunter”. Hopefully, “Date Night” will be much better.

The film is about married couple Phil and Claire Foster (Steve Carrel, Tina Fey) who always have a weekly date night to get away from their problems. In order to make that night fun again Phil decides to take Claire to an expensive restaurant. Only problem is, they have no reservation. So when Phil finds out that a couple has no showed their reservation, he and his wife decide to take that reservation. That turns out to be a problem, when two men think that they are the couple that no showed.

Soon their night becomes chaotic, as they are trying to outrun the police and the mob is out to get them. They must find that couple who made the original reservation and the reason why the mob is looking for them, before their night becomes a complete disaster. This comedy also features appearances by Mark Wahlberg (The Italian Job”, “The Departed”) Mark Ruffalo, Kristen Wiig (Adventureland), James Franco (Spider-Man 1-3), and Mila Kunis (The Book of Eli).

At least this film didn’t turn out to be another disaster like “The Bounty Hunter” was. “Date Night is a funny film that generates laughs that everyone can enjoy. Director Shawn Levy does a good job making sure everything work very well. He makes most of the scenes funny, by the way that he directs them. It’s not forced or so lackluster of personality that you’re sitting there waiting for a humorous moment to happen that makes you become bored and not having a good time with the film. There are humorous moments in the film that makes you laugh out loud. The reason that Levy was successful in doing this was the way he directs the acting in the film. He does a good job in developing chemistry between the two leads. It makes the film fun to watch.

Speaking of the acting and chemistry, they both helped make this film entertaining. Both Steve Carell and Tina Fey were both very good here. Their styles of acting gelled very well here, as they did a very good job developing chemistry that need for a film like this. The other thing that I liked about the main performances, each of them brought personality to their characters. This is what I want to see in romantic comedies, not brooding or annoying characters that take up most of the screen time.

The screenplay written by Josh Klausner is effective enough that it generate humor and an entertaining love story. Yes, the story seems generic, but it’s the execution that makes it worth the hour and a half. One of the things that Klausner does to make this work, the lead characters are likeable and no so annoying to the point that you tune out of the story. That was one of the main problems that I had with a recent romantic comedy that I recently reviewed for the site. I liked how he develops and sets up the main characters, as it helps you get you caught up in the adventure that this couple is having. The other thing that makes it work was the way that Klausner times the humor. It doesn’t come a hundred miles per hours at you, instead it comes in the way that you caught up in the humorous action. Also, I liked how there was actual thought into some of the dialogue and jokes. Those worked very well, as it generated laughs to the point that it makes the story and the film enjoyable. The only problem that I can see with this film was that it was a little too short with it eighty-eight minute running time, as there could have been a good ten more minutes added, but still I enjoy this film.

“Date Night” is a perfect date night film for those that are looking for a fun filled film with two very talented comedians.