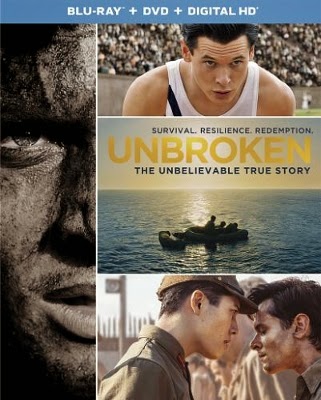 Special features exclusive to the Blu- Ray include Deleted Scenes, Inside Unbroken - A behind-the-scenes look at the film - including The Fight of a Storyteller, The Hardiest Generation, and Fifty Years in the Making. Cast and Crew Concert Featuring Miyavi - Cast-member and Japanese rock star Miyavi performing a concert for the cast and crew. Prison Camp Theater: Cinderella - Watch the Omori prisoners perform their version of Cinderella. Louis' Path to Forgiveness - Learn about Louis' life after the war and his journey from recovery to forgiveness.

Unbroken follows the incredible life of Olympian and war hero Louis "Louie" Zamperini who survived in a raft for 47 days after a near-fatal plane crash during World War II—only to be caught by the Japanese navy and sent to a series of prisoner-of-war camps. The inspirational biopic is coming to Digital HD on March 10, 2015 and on Blu-ray™, DVD and On Demand March 24, 2015 from Universal Pictures Home Entertainment and Legendary Pictures. Directed by Academy Award® winner Angelina Jolie, Unbroken chronicles the unbelievable true story about triumph over tribulation and the resilient power of the human spirit. Adapted from Laura Hillenbrand's acclaimed New York Times bestseller, Unbroken is packed with exclusive bonus content that dives deeper into the life of Louie Zamperini and the legacy he left behind. Exclusive to the Blu-ray™ Combo Pack are deleted scenes, behind-the-scenes interviews and a closer look at the life of the real Louie Zamperini after war and the inspiring themes of faith, resilience and the power of forgiveness. Jolie follows up her acclaimed feature film-directing debut, In the Land of Blood and Honey, with the unbelievable true story of Zamperini, a working class kid from Torrance, California, who transformed himself from juvenile delinquent to a 1936 Olympian by channeling his defiant energy into a shocking talent for running. Louie's unfaltering determination and ferocious will then carried him through monumental tribulations during his military service and he became a true American hero. Selected as one of American Film Institute's 2014 "Movie of the Year," Unbroken stars Jack O'Connell ('71, Starred Up) plays Louie Zamperini, heading up an international cast that includes Domhnall Gleeson (Harry Potter series), Finn Wittrock (HBO's "The Normal Heart"), Garrett Hedlund (TRON: Legacy), Jai Courtney (Divergent), John Magaro (The Box), Luke Treadaway (Clash of the Titans), Ross Anderson (The Silent Storm) and Japanese singer-songwriter Miyavi in his American acting debut.
at 10:34 AM
Labels: Angelina Jolie, Domhnall Gleeson, DVD/Blu-Ray News, Garrett Hedlund, Jack O' Connell, Jai Countney, Unbroken, Universal Pictures