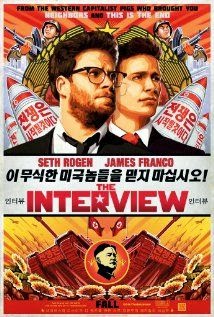 'THE INTERVIEW': Five Stars (Out of Five)

The most talked about, and controversial, movie of the year (or any year) has to be this sociopolitical action-comedy flick, starring Seth Rogen and James Franco as journalists attempting to assassinate the North Korean dictator Kim Jong-un. It was directed by Rogen and his longtime writing partner Evan Goldberg (the two also directed and co-wrote 'THIS IS THE END' as well as co-wrote 'PINEAPPLE EXPRESS', 'SUPERBAD', 'THE GREEN HORNET' and other popular comedy flicks). It was written by Rogen, Goldberg and Dan Sterling (a TV writer and producer who's probably most famous for his work on 'THE DAILY SHOW'). It costars Randall Park, Diana Bang and Lizzy Caplan and features multiple cameos from stars like Eminem, Rob Lowe and Joseph Gordon-Levitt. The film has become one of the biggest news stories of the year (in film, at the very least), beginning last June when the North Korean government first heard about the movie and threatened retaliation if it was released. Attention for the film was escalated even further when the studio behind the movie, Sony, was hacked (in late November) by an organization calling themselves 'Guardians of Peace' (or GOP). Several Sony films and confidential files were leaked online and then terrorist threats were made (by the GOP) to any theaters which showed the film. All of the major theater chains backed out of playing the movie and Sony cancelled the release of it entirely. That is until they received a lot of support from movie fans and advocates for artistic freedom and free speech; including celebrities (like George Clooney, Brad Pitt, Judd Apatow, Bill Maher and many others) and politicians (like Mitt Romeny, John McCain and President Obama). The movie was eventually released through indie theaters and internet sites (like YouTube, Google Play and X-Box Video), a day before it's original release date. I think all of the hype, media circus (about the film's release) and passionate civil rights advocacy made the movie an even better filmgoing experience. I absolutely loved it!

Rogen plays Aaron Rapoport, a TV producer for the popular pop culture tabloid show 'Skylark Tonight'. Franco plays Aaron's best friend, Dave Skylark, who's also the host (of course) of 'Skylark Tonight'. Their show is a huge hit with mainstream viewers but Aaron feels like he's 'sold out' and doesn't produce quality news, like he had always dreamed of. When Dave finds out that Kim Jong-un (Park) is a big fan of their show, the duo sees it as a chance to finally gain some credibility; through interviewing the hated dictator. Jong-un accepts their interview offer but when the CIA finds out about it, they ask Aaron and Dave to assassinate the North Korean leader instead.

It's almost impossible to separate the film from it's historical media coverage and the political events surrounding it's release, when judging it's quality. This is why I think some viewers are giving it a harsher and more negative review than it actually deserves; because they're trying to prove that they're not being influenced by all of it's hype. I loved it but I'll admit that part of the reason I enjoyed it so much is due to it's 'event status' and unprecedented media attention. Even so it's an amazing film; one of Rogen, Goldberg and Franco's best movies and it's easily the funniest film of 2014. It's also impressively directed (by far Rogen and Goldberg's best looking and edited movie, to date); including some spectacularly cool action scenes, some genuinely suspenseful moments and a decent amount of involving character development. I loved the social and political commentary and I'm also really glad the filmmakers were brave enough to actually make Kim Jong-un the movie's villain (rather than making up a fictional dictator for it's heroes to assassinate). It wouldn't have been nearly as good, or moving, if they had tried to please overly sensitive ultra-liberals (who think it's inappropriate). I don't believe in the death penalty or torture but I also don't care about the possible upset feelings of a mass murderer. It's a great film (and a very important one) because Jong-un is the movie's central antagonist. I also think opinions on the film's quality basically come down to whether you like comedy or not. A lot of seriously close minded people don't see the value or importance of humor, in life or in art. Those are the type of viewers that won't appreciate this film. Everyone else should love it. It's definitely one of the best movies of the year and by far the most important, any way you look at it!
at 7:26 PM
Labels: James Franco, Reviews, Seth Rogen, Sony Pictures, The Interview