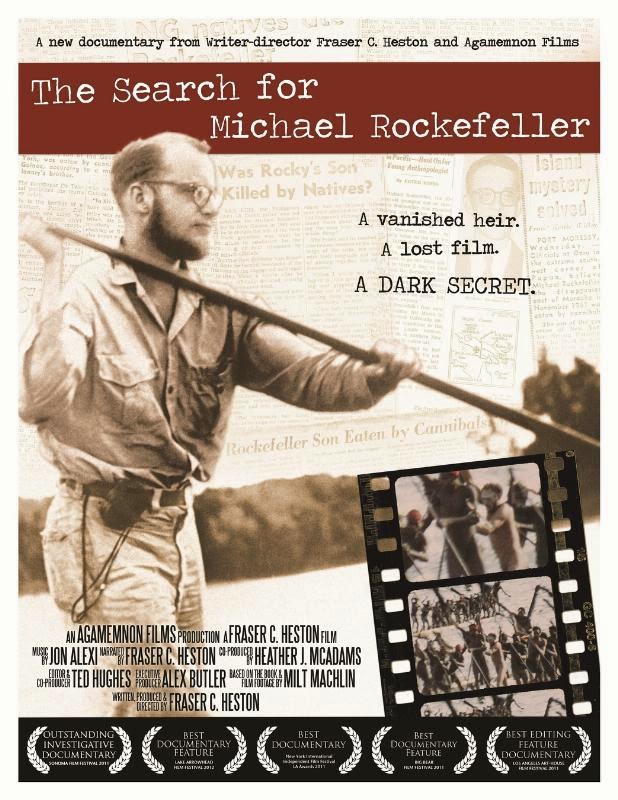 "The Search for Michael Rockefeller" hits Netflix on February 1st.

For more information on this film, you can visit the film's official website at: http://www.searchformichael.com

AGAMEMNON FILMS, founded by Fraser C. Heston and his father Charlton, is pleased to announce that NETFLIX has acquired subscription VOD rights to their award-winning documentary, THE SEARCH FOR MICHAEL ROCKEFELLER about the disappearance and ultimate fate of the Rockefeller scion in New Guinea, written, directed and produced by Fraser C. Heston. Airdate on Netflix is set for February 1, 2015.

The deal was brokered by Mark Kashden of CINEDIGM, the leading independent content distributor in the U.S. The film is repped for all other rights by Paul Hudson of OUTSIDER PICTURES, an international sales and distribution company.

In 1961, Rockefeller's trading canoe capsized off New Guinea. Rockefeller set out to swim for shore, with the fateful words: 'I think I can make it…' He was never seen again. Or was he? In 2007, Heston discovered a lost cache of unedited, unseen 16mm footage shot by Milt Machlin, (author of the 1973 classic The Search for Michael Rockefeller) during his 1969 expedition to the New Guinea in search of Michael.

"This footage is extraordinary," says Heston. "It's a time capsule of the last days of stone-age New Guinea."

The documentary includes interviews with missionaries who argue forcefully that Michael was killed and eaten by cannibals. However, Heston was shocked to discover a shot of a naked white man paddling in a canoe full of Asmat warriors, who looks disturbingly like Michael – taken 8 years after Michael disappeared.

Helmer Fraser Heston is also developing a feature film at Agamemnon, based on Machlin's remarkable adventure and Michael's untold story, entitled GHOSTS OF NEW GUINEA. Heston, who wrote the screenplay with scribe Heather J. McAdams, is partnering on the production with Aussie producer Robin James, of Ploughed Field Productions, based in Brisbane, Australia, and will begin scouting locations in North Queensland in January.
at 7:21 PM
Labels: Agamemnon Films, Documentary, Indie News, Netflix, The Search for Michael Rockefeller, VOD News