"Into the Woods" Review - Written by Tim Hellman 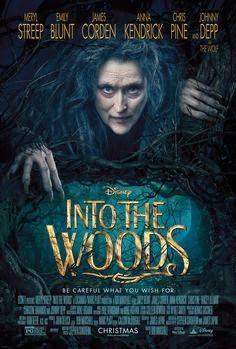 'INTO THE WOODS': Two and a Half Stars (Out of Five)

Musical fantasy film based on the popular Broadway musical, of the same name, by James Lapine and Stephen Sondheim. It was directed by Rob Marshall (who also directed the 2002 Academy Award winning musical 'CHICAGO') and written (for the screen) by Lapine. The film takes multiple classic Brothers Grimm fairy tales and combines them into one twisted story (with singing throughout). It stars Meryl Streep, Anna Kendrick, Emily Blunt, James Corden, Chris Pine, Christine Baranski, Lucy Punch, Tammy Blanchard, Tracey Ullman, Johnny Depp and many others. It's gotten mostly positive reviews from critics and is considered a likely Oscar nominee for Best Picture (and multiple other awards). I hated it!

The story revolves around a baker (James Corden) and his wife (Blunt). The two desperately want a child but can't have one; due to the curse a witch (Streep) placed on the baker's family, years ago. The only way the baker can get rid of his family's curse, is to collect four items for the witch; a white cow, a red cape, yellow hair and a gold slipper. So the baker and his wife set out to obtain the coveted objects and while doing so they cross paths with Cinderella (Kendrick), Rapunzel (Mackenzie Mauzy), Little Red Riding Hood (Lilla Crawford), Jack (Daniel Huttlestone) and many other classic fairy tale characters. Things take a really dark turn.

I respect and enjoy musicals, when they're well made, but this is just painful to sit through. I don't mind that the writers took classic fairy tales and updated them, with a modern dark twist, but I still don't think it's very interesting or funny. The movie feels a lot like a 'one joke' 'SATURDAY NIGHT LIVE' sketch, stretched into an over long movie. The humor is really forced (and cheesy) and the characters do a lot of irrational, pointless things. The songs aren't very good and the third act is just plain boring. It is well acted and nicely filmed though (although it kind of feels like a network TV movie). I really didn't enjoy it much and I definitely don't think it deserves any rave reviews or prestigious award recognition.
at 9:58 AM
Labels: Chris Pine, Emily Blunt, Into the Woods, Johnny Depp, Meryl Streep, Reviews, Walt Disney Pictures