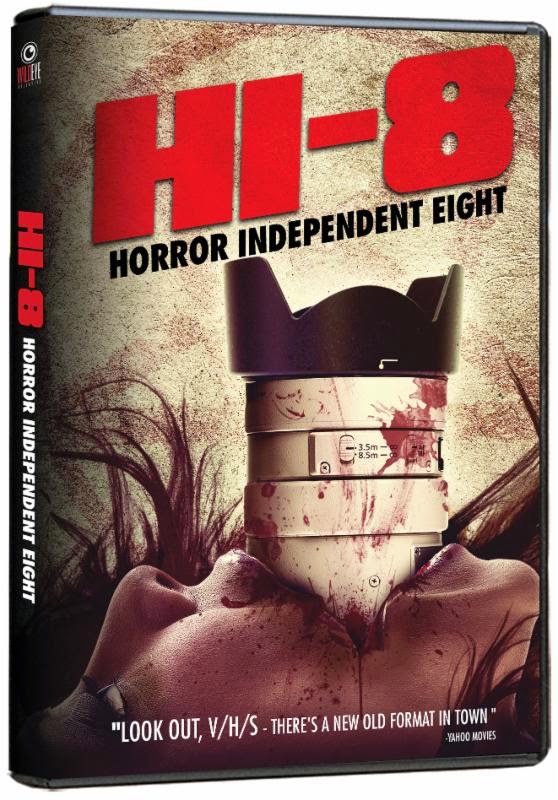 There have been a good amount of horror anthology films that have been released in the last couple of years. “HI-8: Horror Independent Eight" is the latest of these anthology horror films to come out.

Going into this film, I was curious about because of the film’s concept and the fact that I would have to sit through 8 short films and a wraparound segment. I was literally surprised that I enjoy this film considering that segments 2 and 3 sucked badly. But I’m happy to say that this was one very good anthology film.

There were a lot of good shorts in this film including three favorites in no order. The first one that I really liked was the opening film “Switchblade Insane”. “Killing Spree” director Tim Ritter does a very good job making sure that his film is shocking. From the narration of the film to the way that he focuses on his main character, everything had a disturbed tone to it. It helped make the violence shocking. Ritter also does a great job with the way he directs his cast. Whether it’s the way his lead actress Kristine Renee Farley makes the narration very dark to the action that goes on in the short, everything felt creepy and horrifying.

The next film that was very good was Rob Bong’s “Gang Them Style”. This was definitely was a change of pace, as the two films prior to that film sucked big time. One of the things that I liked about this was that it was a change of pace from all the other films. Bong makes sure that the acting fit the film’s twisted tone. The performances kept me entertained throughout the segment, as it contributed to liking this a lot. He also does a very good job with the way that he makes the twisted humor work. It made the short entertaining and turned this film around for me as everything else from there was either good or great.

The other short that I enjoyed so much was Todd Sheets’ “The Request”. This was the creepiest short of them all. One of the reasons that I liked was the fact that Sheets makes sure that he gets a good performance out of his lead actor Brad Westmar, as this is one of those types of shorts where you need the lead performance to very good to make the short entertaining. Sheets gets that by making sure his actor makes his character looked terrified at these haunting call. It gave the film its creepy tone that it needed for it to make it work as a whole. Sheets’ screenplay also does a very good job building the suspense and developing the main character. It helped build up the tensions as the short went on and it sets up the film’s shocking twist. This along with “Gang Them Style” and “Switchblade Insane” were favorites of all the films.

There were two films that were really bad. Yes, I’m talking about the second and third shot that I mentioned earlier. The first film that I hated was “A Very Bad Situation”. Marcus Koch’s direction was very bad. One of the things that I didn’t liked about the direction was the fact that everything claustrophobic. From the camerawork to the way that Koch directs his actors, it felt like he was rushing things. It hurts as it felt like five characters trapped in a room. The other thing that I didn’t like about it was the way that he directs his cast. The acting in this short felt very tongue and cheek. It made me not care about this short at the all, as this was a major turn off.

The other short that I hated was “The Tape” which was right after “A Very Bad Situation”. One of the things that I didn’t like about this was the way that everything felt very dull. Director Tony Masello doesn’t do a good job making sure you’re interested in the story. From the acting to way the scenes were constructed in the screenplay, everything was poorly executed. The acting was the worst thing about this film. The performances felt lifeless, as the Masello doesn’t do anything to make the performance engaging. This aspect really wanted me to skip this segment all together, as it was that bad.

Considering the two bad films that I just mentioned, I thought this was a good film with some good shorts. “Hi-8: Horror Independent” is an anthology film that has more hits than misses.