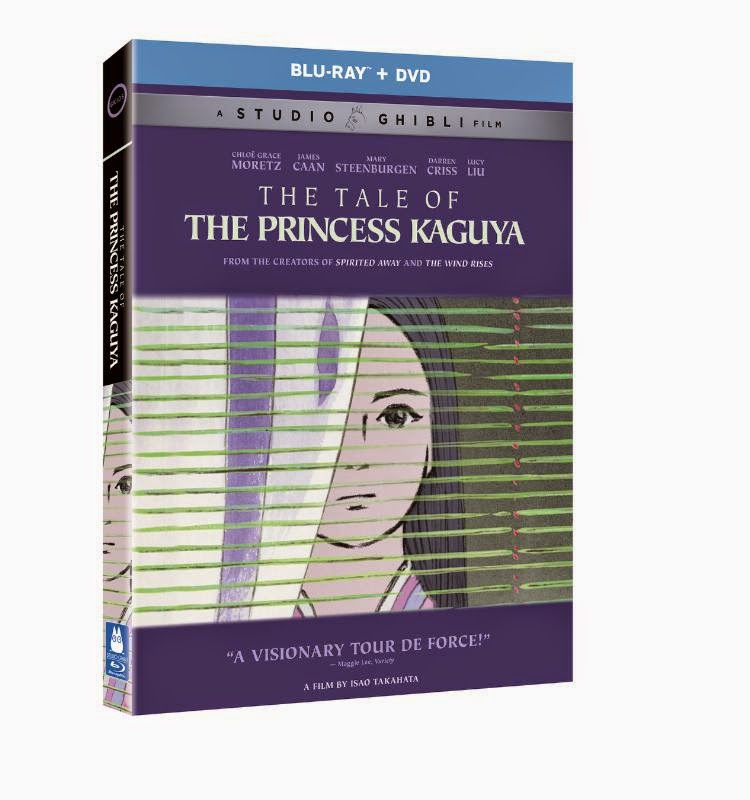 "The Tale of The Princess Kaguya" hits retail on 2/17.

Announced today as an Academy Award® nominee for Best Animated Feature, The Tale of The Princess Kaguya is a critically praised film that features the best of Japanese folklore and artful animation. Legendary Studio Ghibli cofounder Isao Takahata revisits Japan's most famous folktale in this gorgeous, hand-drawn masterwork featuring an all-star cast including Chloë Grace Moretz, James Caan, Mary Steenburgen, Darren Criss, and Lucy Liu. The 3-disc Blu-ray™ includes the film on Blu-ray™ and DVD as well as a separate DVD with a feature length documentary on the making of the film, titled Isao Takahata and His Tale of The Princess Kaguya. Certified 100% Fresh on Rotten Tomatoes and called "Gorgeous and magical!" by The Washington Post, The Tale of The Princess Kaguya, is available to own on DVD and Blu-ray™ with DVD as well as On Demand on February 17, 2015 from Universal Pictures Home Entertainment, in partnership with GKIDS.

Found inside a shining stalk of bamboo by an old bamboo cutter (James Caan) and his wife (Mary Steenburgen), a tiny girl grows rapidly into an exquisite young lady (Chloë Grace Moretz). The mysterious young princess enthralls all who encounter her – but ultimately she must confront her fate, the punishment for her crime. From Studio Ghibli, the studio that brought you Spirited Away, My Neighbor Totoro, and The Wind Rises comes a powerful and sweeping epic that redefines the limits of animated storytelling and marks a triumphant highpoint within an extraordinary career in filmmaking for director Isao Takahata.
at 8:24 PM
Labels: Animated Film, Chole Grace Moretz, DVD/Blu-Ray News, The Tale of The Princess Kaguya, Universal Pictures