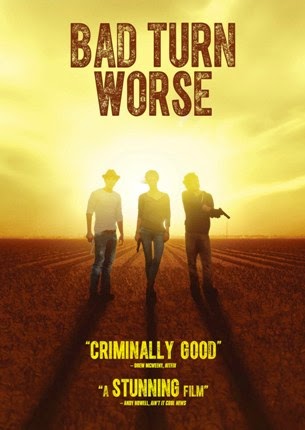 There's no other way to say it, Bad Turn Worse is just a good movie. It isn't a great movie by any stretch of the imagination, and that's okay; being solidly good is still better than most of the movies that get released these days!

Bad Turn Worse (directed by Simon and Zeke Hawkins from a screenplay written by Dutch Southern, his first) is the story of three kids about to graduate high school and looking to find a way to escape the little southern country town they're afraid they'll live in all their lives. There's B.J., the wannabe gangster played perfectly (except for his awful Southern accent) by Logan Huffman; his girlfriend Sue, played by possibly the best part of the cast, Mackenzie Davis, whose performance is captivating; and the boy Sue really loves, B.J.'s best friend Bobby, played by Jeremy Allen White (who, if you've seen him as Lip on Shameless, you know is one of the best young actors out there right now). These three carry the movie, putting all the right emotions and intensity into the love triangle between them and the deadly trouble they get themselves into. They really put in some deep, potentially star-making performances.

The film's trio of stars are bolstered by a small, talented supporting cast that includes character actor John Gries in a brief but pivotal role as the town sheriff and William Devane as Big Red, the local crime boss everyone is scared of. The real star of the supporting cast is Mark Pellegrino as Giff, a low-level functionary of Big Red's and a full-blown psychopath in his own right. It might be the best I've ever seen from Pellegrino, who seems to be channeling Sam Rockwell in his performance. That's how good he is in this movie, so much so that he steals every scene he's in with his very terrifyingly laid-back brand of menace.

Giff, in fact, is central to moving the plot, which is a simple one but very well-written one, along. B.J. works for Giff and decides to steal some money when he's not looking. Of course, Giff eventually finds out, but Bobby takes the fall for his friend. So Giff decides the best thing to do is force B.J., Bobby, and Sue, who helped them spend the money, to replace the money by stealing some of Big Red's cash... despite the fact that the money B.J. stole from Giff was actually Big Red's in the first place. What follows is a tightly plotted, smartly scripted tale of betrayal and love directed and filmed in a wonderfully realistic, gritty way that captures the feel of the characters and their surroundings beautifully. There's one scene in particular between Giff, Bobby, and Sue where all the elements come together perfectly to create an amazingly gripping sequence.

For all the praise I've lauded on it, Bad Turn Worse is kept from surpassing good and becoming great by plot twists that are way too choreographed and the short shrift that is given to developing the back stories of most of the characters. Even with those failings, it's still an entertaining movie that deserves 3.5 stars out of 5.
at 7:38 PM
Labels: Anchor Bay Entertainment, Bad Turn Worse, Reviews