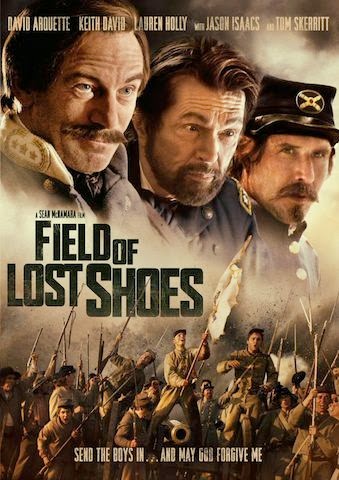 This is based on the true story where a group of young teenagers, cadets defended The Shenandoah Valley against General Grant’s Union forces. Over 200 young men of the Virginia Military Institute give support to the main troops already fighting. This showcases the emotional ordeal through seven friends who must fight and defend. This battle would change each of them. All of them faced a new reality of war in their young lives.

If you know me I am a huge history buff, specifically when dealing with the subject matter of The Civil War. Living in Tennessee the once bloody horror filled battle fields are all around me. Monuments and so on can be found everywhere in Tennessee and I have been to countless of them. When I got word of this film I was excited because I love Civil War cinema. This is a passionate, emotional and truth filled film that left me with respect for this movie.

A true winner on the subject. Amazing recreations of the battles and amazing costumes. The movie places you there in the battle and creates an eye opening experience as you get to know these characters and the ultimate reality they face head on. You as the viewer can’t help but feel the tragic ordeals and the suffering but most of all the emotional makeup of each one of these characters become a part of you.

The storyline is so believable and displayed through actions and character chemistry that is able to make you apart of the battle and the emotional aftermath of this horrible war. Directed strong in the reality setting. The movie is able to flow on screen as if another time and another place. You the viewer are planted smack in the middle of a different time and of different beliefs but most of all the inner in-depth reality of a moment in history that forever stains the history of America. The Civil War was a harsh and destructive death bed of tears and agony. Thousands upon thousands perished in a bloody ordeal that killed brother, fathers, mothers and destroyed families as they fought against each other in unrelenting savagery and pain. This film shows a personal side to this reality in history that should never be forgotten.

What makes this film truly stand out and ultimately becomes a part of the viewer is the feel as if it’s real. Its production and set up gives a stamp of historical concepts. It’s a film that showcased detail and the ultimate love for showcasing this horrible moment in American history. It gave an outlet to a subject that is never old because of the reality that America fought itself, on its own land.

Something that stands out is the direction and cinematography. Sean McNamara directed a film of war and the emotional side of war. He was able to craft a film that seemed so real and so personal and so in-depth into a part of history that never gets old in telling or showcasing what happened. He created a nice, tight, structured film that displays everything it needed to do and yet did so much more as the film unfolded. McNamara had vision of what he wanted to do and accomplished it.

The next powerhouse would have to go to Brad Shield. His cinematography is excellence and crafts itself on screen that makes a total splash and ultimate control of the film. All the sceneries and shots, small and long are truly memorable in that it places you there among the horrors and the personal emotions of each character. The direction is by a veteran of Hollywood both small and big from producing and writing to directing.

Sean McNamara directed Field of Lost Shoes with a quality of respect for the subject. He has been a part of my movie loving life since I was a small little kid. Producing some of my favorite TV shows and directing them also. From Kid films to kid shows and beyond he has a talent in capturing the performers in the way he wishes them to own their parts. I think he did this low-budget war film justice with his direction.

The film takes place in 1864 in Virginia. The locations, costumes and weapons bleed from the past into a present film. You as the viewer watch a certain part of the Civil War unfold as if it’s before your eyes. Dave Kennedy and Thomas Farrell wrote a script that came to life. They were able to build the characters and the situations. Both of them also produced the film.

One of the true stand out realities to the film is the overall acting by all involved. I have to pin point Luke Benward who plays the character of John Wise. He is such a talented young man and always is able to capture his characters to a clarity of understanding and always gives them a personal emotional concept as if the character is real. I have watched him grow up in cinema from a small little boy in We Were Soldiers, until now as a young man.

One of my favorite acting performers of the day would have to go to Jason Isaacs. Always a true treat to see his craft at work. Always an amazing performer. He is able to hold the viewer in every performance. His roles never lack. Even if the movie stinks, his characters always stand out. The role of John C. Breckinridge is no different. He owns the character in this movie and sticks out as one of the memorable moments.

This also stars many acting veterans to the film world the amazing Tom Skerritt. Always a true treat to see. He is one of the great performers in all of cinema. The stunning much underrated powerhouse Keith David. I have grown up watching him in countless cinema both small and large. The one and only beautiful Laruen Holly and someone that has grown on me in showcasing his dramatic acting David Arquette with the likes of movies like The Grey Zone and now Field of Lost Shoes. Also starring the wonderful talented Gale Harold who is a true underrated powerhouse of acting. He creates perfection in his many performance and the role of Major Charles Semple is no Different.

This has an amazing cast of young actors that know how to hold an audience through their performances and actions that they make seem real. With the combining of direction and the civil war time reality, the movie showcases itself a memorable piece of War Cinema, yet it becomes a drama in the reality of each of these people’s lives and the torment and horrors of this ghastly war of innocence slain because of a horrible stain in history.

This is what I would call a low-budget Civil War film that try’s it’s hardest to become something inside the greats of this style of cinema. I think the ultimate judge to this film is going to be in the eyes of the beholder. Those who love Civil War cinema and historical moments in this horrible yet necessary war will enjoy this low-budget film. I feel each watcher of the movie is going to take something from it. Some will absolutely love and some will not. You as the watcher can tell, that it’s a low budget film at times but I over look this reality because the story works. The reality of history displays itself in a believable reality that the viewer can’t help but feel for these young troops.

There have been negative reviews on this film where reviewers say it has no standing against other Great War films like Gettysburg or Gods and Generals and so on. I think this generation and a lot of the reviewers out there just don't get this reality of history anymore and the importance and ultimate heartbreak that this war was. I feel we have lost the understanding that the Civil War was a battle of fathers, sons and average people fighting. Most of these men, mainly young took up the gun to defend or fight for what they believe in. These were not hardened war trained individuals. This where boys, young men and many died. First off there was more to this war than Gettysburg. Yes Gettysburg was a main part of the war but it was just a fraction. Field of Shoes showcases one of the other battles. The Civil War was about many areas being defended. These young men held, fought and defended. This movie gives a voice to individuals that bled but ultimately fought and held their own. Most of comments have been Civil War reenacter’s will like this movie and that’s about all. I beg to differ, yes they will love it but the lover of history, the researcher of Civil War, and the true movie enthusiast I feel will enjoy it.

I enjoyed this film. It’s a low-budget film that held its own and created a memorable piece of cinema.