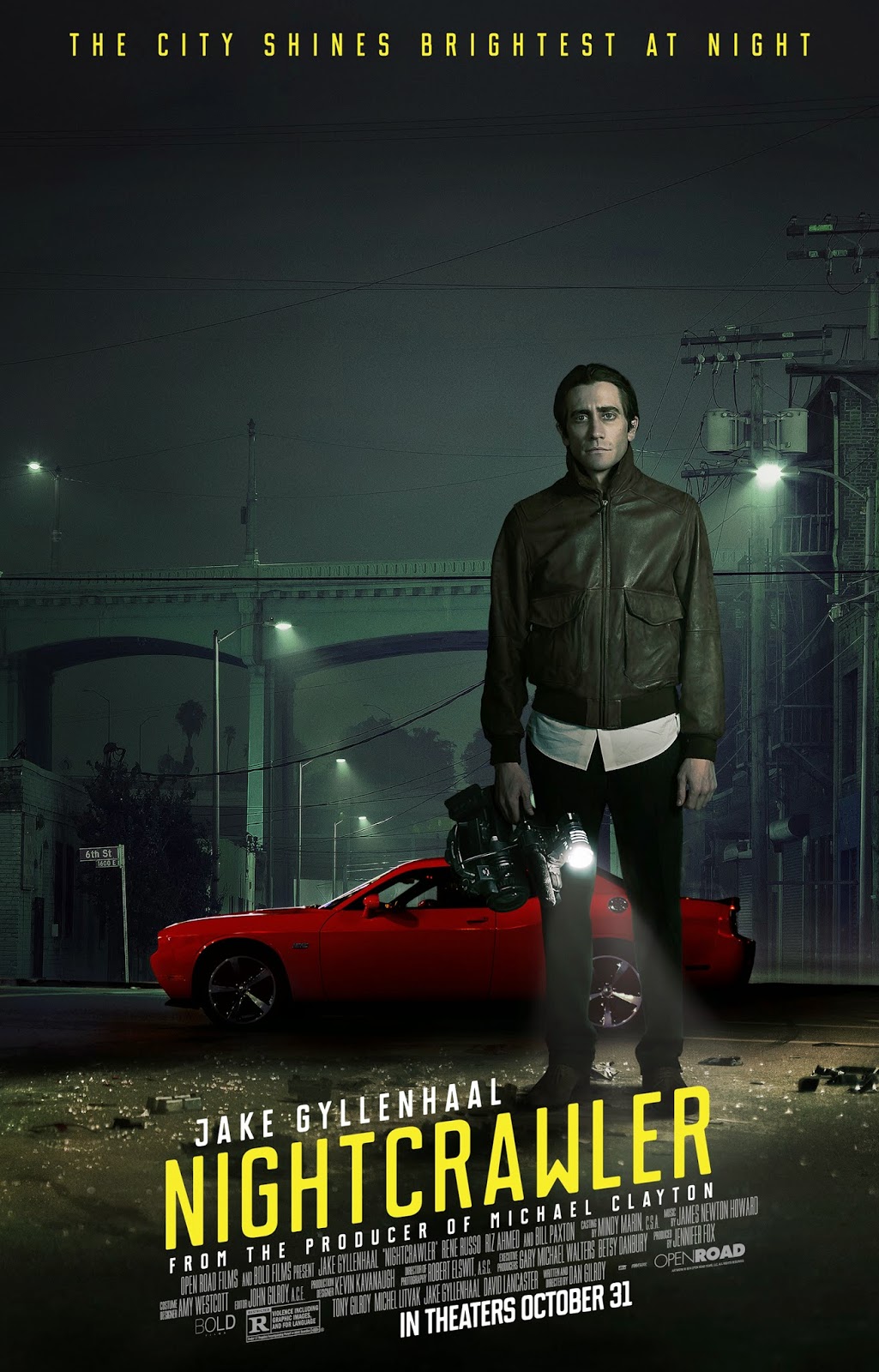 'NIGHTCRAWLER': Five Stars (Out of Five)

Indie thriller about a quirky sociopath who aggressively pursues a career in freelance crime journalism; video recording it and selling it to the highest bidding news station (also referred to as nightcrawling). The film features Jake Gyllenhaal in an award worthy performance, as the lead character, and also stars Rene Russo, Riz Ahmed and Bill Paxton. It was written and directed by debut feature film director Dan Gilroy and has received nothing but rave reviews from movie critics. While I found it to be very sickening, and extremely disturbing, I also think it's one of the best films this year.

Gyllenhaal plays Louis Bloom; a thief as the movie opens, who makes a living selling stolen material from Los Angeles construction sites. He's determined to make something more of himself though and is inspired, by two 'nightcrawlers' one night, to go after a career in freelance video journalism. He specializes in violent accidents and murders, which specifically take place in wealthy neighborhoods, because that's what news stations will pay the most money for. He develops two odd relationships; with a naive assistant he hires (Ahmed), that's desperate to make some cash, and a career driven news director (Russo), that's past her prime. Bloom seems to lose any reasoning of what's right or wrong (if he had any to begin with) as he becomes more and more obsessed with making a name for himself.

The film is quite possibly one of the best examinations of a sociopath ever put on screen; I would definitely compare it to other classics like 'TAXI DRIVER' and more recent hits like 'GONE GIRL'. The way Gyllenhaal's character (Louis Bloom) is so brilliantly calculated and disturbingly driven, in accomplishing his lofty goals, he's very similar to a character in 'GONE GIRL'; the two movies are also a lot alike in how they present all the darkest parts of society, and humanity, without showing much of the light or hope. Gyllenhaal's character also (eerily) seems to be driven by the same morals, and ambitious drive for success, that FOX News is always trying to promote on their network. This guy lives by the same exact moral code, and lack of ethics, that the popular conservative news channel is consistently trying to prove is necessary in achieving happiness and success in one's life. Their network is probably made up of hundreds of Louis Blooms, and Russo's news director character, as employees. Gyllenhaal is one of my favorite actors and this is arguably his best performance; Gilroy's directing and screenplay are masterful too. It's a movie I'll never forget and while it made me sick to my stomach (for awhile) after viewing it (and I found it hard to adjust to any kind of a happy mentality, for a great deal of time afterwards too), it's still a great film and shouldn't be missed. A movie this ugly and disturbing deserves nothing but compliments; for being able to do those things this well.
at 4:50 PM
Labels: Jake Gyllenhaal, Nightcrawler, Open Road Films, Reviews