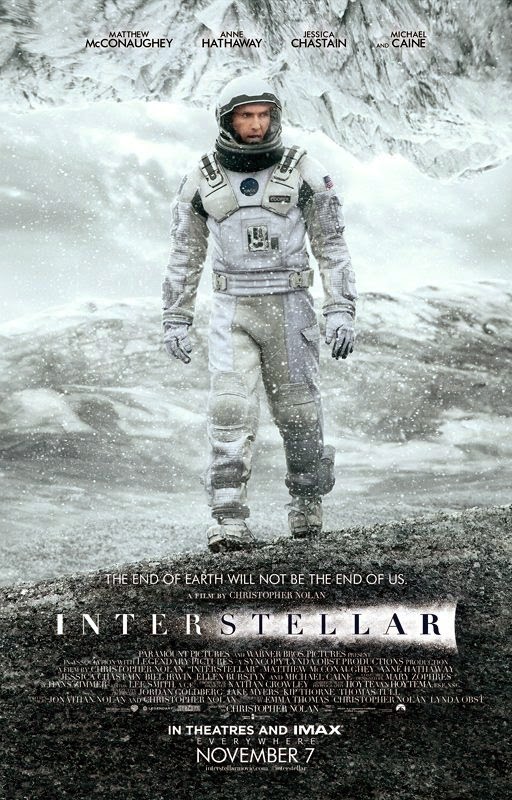 'INTERSTELLAR': Five Stars (Out of Five)

Christopher Nolan's new $165 million budgeted sci-fi epic about a team of explorers that travel across space, through a newly discovered wormhole, in an attempt to find a more habitable planet for humanity to live on; after all resources on Earth are nearly destroyed, by drought and famine. It was directed by Nolan and written by him and his brother Jonathan (the two have teamed together on many scripts for Christopher Nolan films). It stars Matthew McConaughey, Anne Hathaway, Jessica Chastain, David Oyelowo, Wes Bentley, Casey Affleck, Topher Grace, John Lithgow, Ellen Burstyn and Michael Caine (plus a few other surprise celebrity cameos, if you don't check IMDB). I think it's a breathtakingly beautiful and impressively ambitious film but it isn't quite as great as I was hoping, even so.

The story begins in the near future, when mankind is desperately trying to produce more agricultural resources; due to natural disaster (like mainly huge dust storms) depleting most of what we had. A secret NASA intelligence base, lead by Professor Brand (Caine), has discovered a wormhole that can quickly lead space travelers to other uncharted planets. They hope to send a team of experts through the wormhole, in an attempt to find a planet suitable to live on and colonize (saving humanity). Brand recruits Cooper (McConaughey), a former NASA pilot, into leading the mission; when he mysteriously stumbles across their hidden base. Cooper is reluctant to leave his family behind, especially his daughter Murphy (Mackenzie Foy), but he knows it's the only way to possibly save them.

The scientific aspects of the story are pretty complex and hard to follow (for me at least) but I think with repeat viewing I'll understand the movie a lot more (it took me at least two or three viewings to fully get 'INCEPTION'). For that reason, plus it's nearly three hour running length, it is very slow and feels really long in places. It's visually stunning and always emotionally involving and interesting (even if you can't always understand what's going on). The acting is all great, especially McConaughey (his character is by far the most developed); he, and his costars, do bring a lot more depth to the film (than just the Nolans possibly could). Like a lot of classic sci-fi it gets really philosophical in the end; attempting to explore really broad elements of love and life that science never has been able to, but that's what I especially liked about it. Nolan does an amazing job presenting the material; even if he's a lot more focused on telling a broader and more emotionally complex story this time around, rather than stunning people constantly with action and quick pacing. It's definitely memorable and one not to be missed (especially if you're a Christopher Nolan or sci-fi movie fan).
at 4:50 PM
Labels: Anne Hathaway, Christopher Nolan, Interstellar, Matthew McConaughey, Michael Caine, Paramount Pictures, Reviews