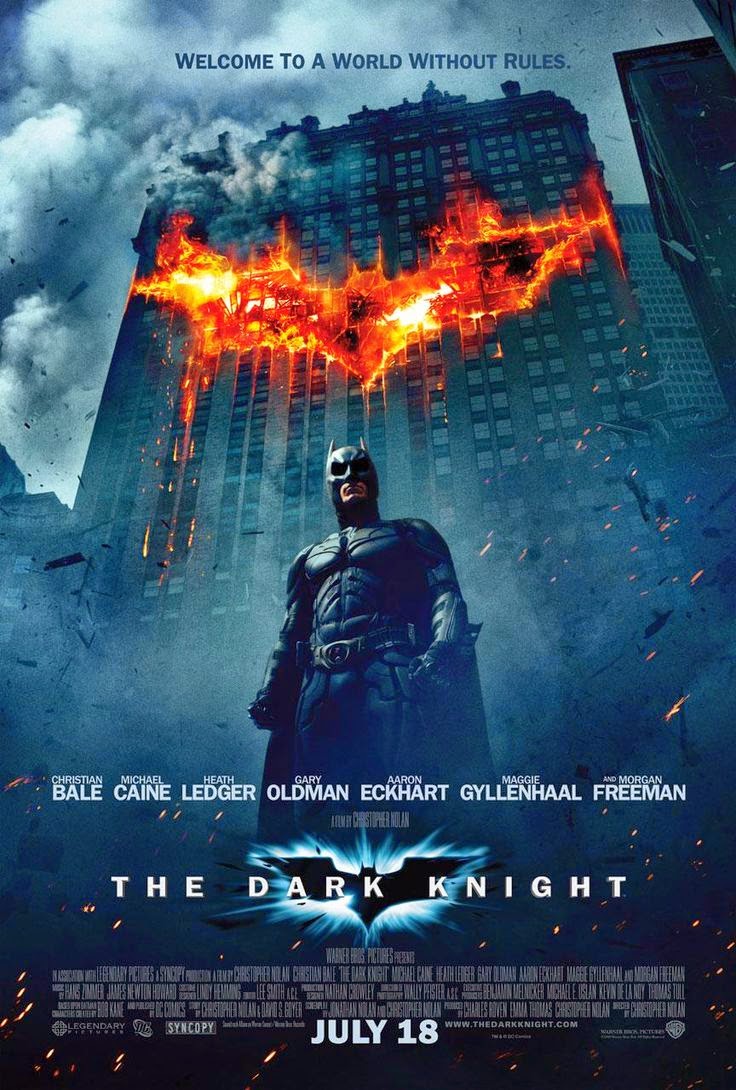 Welcome to this week's edition of Anthony T's #TBT. This week with Christopher Nolan's"Interstellar" heading into theaters and IMAX this week, I decided to go back into the vaults and find my review of his 2008 "The Dark Knight". With all the superhero movies out there today, "The Dark Knight" still ranks up there as one of the best superhero films ever made. It also garnered a Best Supporting Actor win for Heath Ledger, who was great in this film and still deserves his Oscar for that film to this day.

The Dark Knight is the second film in Warner Bros' re-energized Batman franchise but most of the film’s hype has been surrounding the death of Heath Ledger. This is his last completed film before he passed away this past January from a drug overdose of prescribed drugs.

The Dark Knight is set one year after the events of Batman Begins, where Batman’s (Christian Bale) crusade to rid Gotham City of crime has been going very well, with the help of Lt. James Gordon (Gary Oldman) and the city's newly appointed District Attorney Harvey Dent (Aaron Eckhart). Everything is fine until a new sadistic villain known as The Joker (Heath Ledger) starts creating chaos in Gotham City. In the amidst of this, his alter-ego Bruce Wayne is caught up in love triangle with his childhood friend Rachel Dawes (Maggie Gyllenhaal) who is in love with Harvey Dent even though he still has feeling for her. Now Bruce Wayne must put side this romantic triangle aside, as his alter ego Batman must use every means necessary to stop the Joker before his reign of terror burns Gotham City down and turns it into a city of chaos. Michael Caine, Morgan Freeman and Eric Roberts also co-star in this film.

Before I go into my review of this film, this is definitely not a film that your seven or eight year old kid should see as this is very violent and the subject matter may frighten them. So take them to go see Wall-E or Space Chimps instead.

With that said, I remember watching the review on Ebert & Roeper that Richard Roeper said that “The Dark Knight” was the best superhero movie ever and a film that should be nominated for Best Picture with Heath Ledger being nominated for Best Supporting Actor. My thought at the time that the Oscar talk that Roeper talked about was absolutely so far fetched. Also when I heard that Health Ledger was cast as the Joker sometime last year, I didn’t think that it was good casting. Man, was I totally wrong with both the casting of Ledger and Roeper’s highly praised review of the film. This is definitely a film that we might be talking about during Oscar season.

The Dark Knight is truly the year’s best film so far. Director Christopher Nolan does a great job again with the direction. I liked how he goes for a more realistic approach with the action. He achieves that in the way he directs the action scenes and the actors. The action scenes was realistic and includes one the best chase scenes since the shootout in Michael Mann’s Heat. The acting felt top-notch. This was something that you would see in an Oscar caliber film. Christian Bale turns in a very good performance again as Bruce Wayne, but the main star of this film is the late Heath Ledger. This is a performance that I would be still talking in this manner, if he was still living today. His performance as the Joker is up there with Sergi Lopez’s Captain Vidal in Pan’s Labyrinth as the most sinister performance ever. It’s definitely an Oscar-worthy performance, as the performance was terrorizing and frightening. The supporting cast was also good. Aaron Eckhart was very good as Harvey Dent/Two-Face, playing two variations of one character, as the character was likeable one minute and unlikable the next. Morgan Freeman, Gary Oldman and Michael Caine are also back from the first film along with Maggie Gyllenhaal taking over for Katie Holmes role in the first film.

The screenplay written Christopher Nolan and his brother Jonathan Nolan was very good. I would even go to the lengths to say that both of them should get an Oscar nomination for this screenplay. The reason I say that because this film didn’t feel like your average superhero movie. It felt like an epic crime film like “Heat” and “The Departed”. The Nolan Brothers did a very good job writing the characters here, as each of them were different from one another. They also do a great job with the Joker in this film. He was more sadistic and frightening which makes the character more better than in Tim Burton’s Batman where the character seemed comic-bookish and comes off as a prankster than a heartless villain. The Nolan brothers also do a great job developing the themes and the characters. They do explore the society of Gotham through some of themes that are currently happening today like surveillance, terrorism and the media. It's done effectively well here as it added to the film’s dark tone. The character development was also very good, as it added to the whole Batman mythology. But what made this film different from Batman Begins was the fact the story had a lot of twists and turns. Those were done very well, as it kept me on the edge of my seat.

Please note that this is not the last time you’re going to hear me talk about this film. "The Dark Knight" is truly the best film of 08 so far and yes, I’ll say it like Richard Roeper did - “It’s the best superhero movie ever.”