"White Bird in a Blizzard" Review - Written by Jim Herling 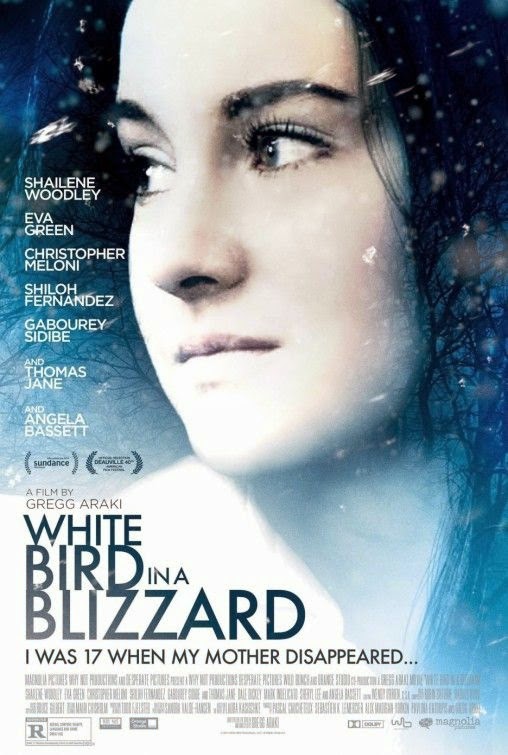 Shailene Woodley is just magnetic. Early last year I heard her described as "the next Jennifer Lawrence," and I bristled a bit because I don't think Jennifer Lawrence is anywhere near done being Jennifer Lawrence yet, no next one needed. But having seen most of her movies at this point, there's no denying Woodley's presence and talent, two things that absolutely carry the mostly boring film White Bird in a Blizzard.

That isn't to say she's the only good part of the cast; far from it, actually. Eva Green is positively brilliant as Eve Connor, the mother of Woodley's character, Kat. She positively boils with depression and desperation and hatred, and does more acting with her eyes than most actors can do with their entire body (there's one scene where she looks at her husband with such disgust, all in her eyes, that is so good I watched it three times). The object of her hatred, her husband and Kat's dad, Brock, is played by Christopher Meloni. He is for the most part quiet and unassuming, the exact opposite of and perfect foil to Eva Green, and he's just as good. They play off each other and in concert with Woodley perfectly. Gabourey Sidibe, Angela Bassett, Thomas Jane, Shiloh Fernandez, and Mark Indelicato round out the cast in supporting roles that are good enough but not worth much more than the brief mention that they exist. Make no mistake, this is a three-person show.

The problem is that the great three-person show we have here deserves a better story than what they get. The direction by Gregg Araki is fine; he composes some really great shots, which if you're at all familiar with him is no surprise. Kat's dream sequences, in particular, are visually stunning. But the story (screenplay by Araki and Laura Kasischke, based on Kasischke's novel of the same name) is beyond generic; daughter of a dysfunctional home, mother disappears presumed dead, father is suspected, child acts out, etc, etc... Things play out more or less the way every other book or movie set up the same way has taught us to expect things to. There's a minor twist to things at the very end that, while slightly novel, doesn't really improve anything. I'm only giving the movie itself two stars out of five, but if you want to see some great acting on display, give it a watch. You won't be disappointed.