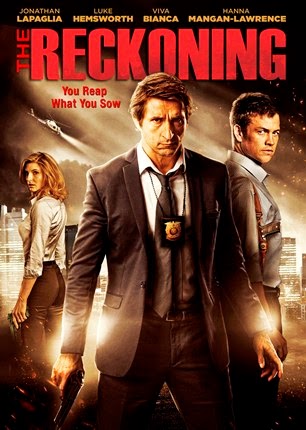 'THE RECKONING': Three Stars (Out of Five)

Australian crime-mystery-thriller flick starring the brothers of some well known celebrities; Jonathan LaPaglia (kid brother of Anthony LaPaglia) and Luke Hemsworth (big brother to Chris and Liam Hemsworth). It was written and directed by John V. Soto and also stars Viva Bianca, Hanna Mangan Lawrence and Alex Williams. It tells the story of a cop investigating the murder of his former partner; while also tracking down two troubled teens, linked to the killing. The movie is pretty well made but nothing too memorable.

LaPaglia plays Robbie Green; a detective investigating the roadside murder of his ex-partner Jason Pearson (Hemsworth). He finds an SD card, at the scene of the crime, that contains video shot by two runnaway teens; Rachel (Lawrence) and AJ (Williams). The teens were making a documentary, on the hit-and-run death of Rachel's sister, and the video could contain information leading to Pearson's killer. With the help of Detecitve Jane Lambert (Bianca), Green investigates the crime and finds some pretty shocking and gruesome imagery, on the video, in the process.

I was expecting a pretty poorly made, and mostly boring, B movie crime thriller but this is better than that. The acting is all pretty decent (especially LaPaglia and Lawrence) and the directing isn't too amateurish. It does kind of feel like a long episode of a popular cop TV show, but a good one at least. While the film is more interesting (and better made) than I was expecting, it's still nothing too special and I doubt I'll remember too much about it more than a year from now.
at 7:20 PM
Labels: Anchor Bay Films, Reviews, The Reckoning