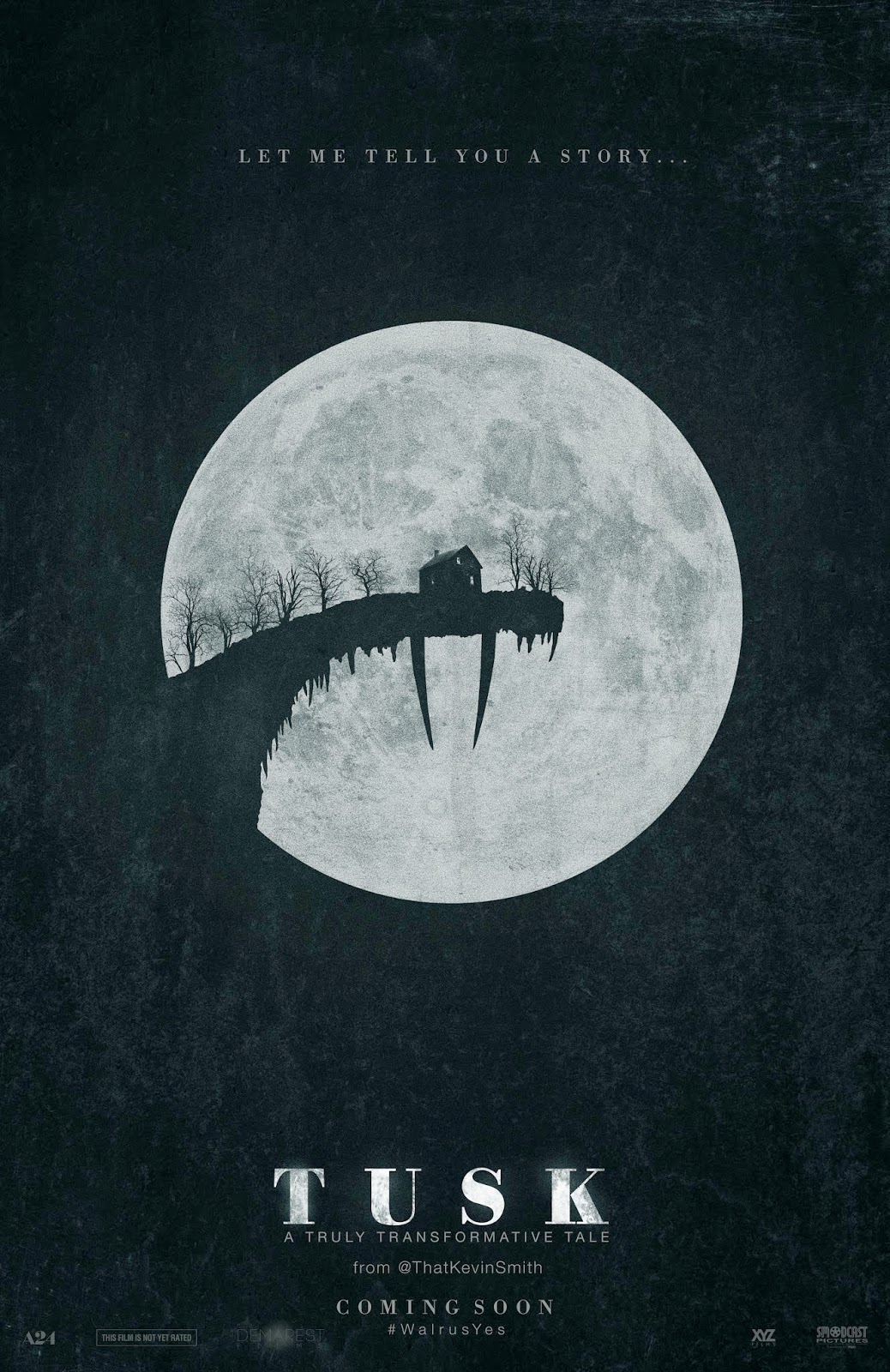 I don't know if it's possible to smoke so much pot your brain actually breaks, but if it is, Tusk proves that Kevin Smith passed that point a country mile ago. And as someone who has been a fan of Smith's for the last twenty years, I can tell you that isn't a bad thing at all.

Smith wrote the screenplay for Tusk, basing it on one of his many podcasts which, in turn, was based around a Craigslist ad he once saw about a guy looking to rent a room to someone rent-free in exchange for the renter dressing up like a walrus for a few hours a day, an ad that was mercifully fake. In Smith's film version, which he also directed, our walrus aficionado isn't just a guy looking for a roommate but a serial killer named Howard Howe (Michael Parks), who is looking to recreate what he calls the happiest time of his life, a time he spent with no one but a walrus named Mr. Tusk for company. His victim isn't a room renter but a podcaster named Wallace (Justin Long) who lives to interview and embarrass people who are internet famous for all the wrong reasons. He finds Howard as a consolation prize after his current target commits suicide. The cast is rounded out by Haley Joel Osment and Genesis Rodriguez as Wallace's podcast partner Teddy and girlfriend Ally, respectively, who come looking for him with the assistance of an investigator named Guy LaPointe, who is billed as "himself" (but in the internet's worst kept secret is really Johnny Depp).

Smith's screenplay certainly features enough "dick and fart" jokes to be recognizable as his work, and the bulk of that side of the writing is acted out by Long, who is so wonderfully smarmy and detestable that it's almost hard to feel sorry for what he goes through until he goes "full walrus" (you're going to have to see the flick to find out exactly what that term means). And even then, the bulk of the sympathy for him comes not from him but from seeing how much his friends care; Genesis Rodriquez is breathtaking as his girlfriend, grappling with both love and guilt and being wonderfully expressive about it all, but Osment falls pretty flat. Depp, as usual, is a superstar even though he's just comic relief; he takes comic relief and turns it into a character that is just begging for his own movie.

But there's another side of Smith's writing on display here, a side filled with metaphor and literature and poetry, all for Michael Park's character, and he takes it and runs with it. He's charming and menacing, funny and dramatic, touching and terrifying. So much of this movie rests on Park's shoulders, and if he wasn't up to the challenge the whole thing could have fallen apart, especially once Park has to start sharing his scenes with an enwalrused (yes, I made that word up) Long incapable of speech. But Park is up to the challenge, and Long is great at acting with just his eyes. The end result is a talented cast and a good script and story that takes a movie that could have failed in so many ways and instead turns it into a 3.5 stars out of 5 flick that is great fare, especially for the Halloween season.
at 12:26 PM
Labels: A24, Horrorpalooza 2014, Kevin Smith, Reviews, Tusk