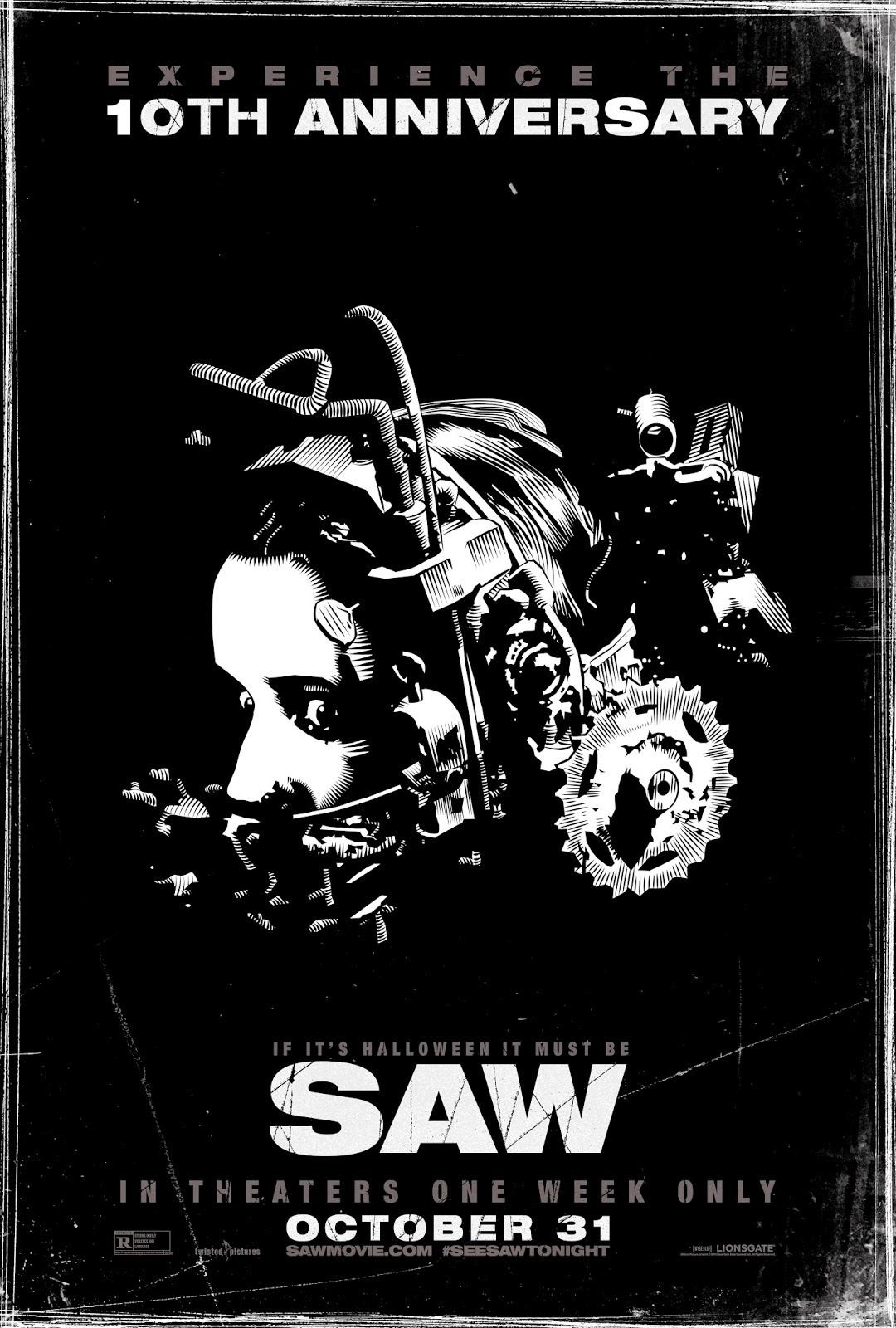 It’s Halloween and it’s our final post for our Horrorpalooza 2014 coverage. “Saw” first hit theaters on October 29th, 2004. During that time with the exception of “Shaun of the Dead”, it was not a good time to be a horror fan. The genre was riddled with bad sequels and really bad Japanese remakes. At the time, it was great that “Saw” came out as it brought a new wave of horror in the form of torture porn. This subgenre would last for a couple of years before an ultra-low budget film called “Paranormal Activity” would change the direction of the genre yet again.

The film follows two strangers (Cary Elwes, Leigh Whannell), who find themselves trapped to the room and chained. They don’t know how they got there and realize that they’re in a secret lair of a serial killer who is only known as Jigsaw. The two are forced to play Jigsaw’s sadistic and twisted game which has rules that must be followed. In order to escape, they must either play Jigsaw’s game or try to outsmart him and escape. The film also costars Danny Glover, Monica Potter and Michael Emerson.

“Saw” is still one of the best horror films to have come out during 2000 to 2010 period. This film still has the same suspenseful and intense impact today that it had ten years ago when it was first released.

One of the things that I liked about this film to this day is James Wan’s direction. He does a very good job making sure everything has a creepy feel to it in the way that he directs the scenes. Every scene in the film had a very dark and frightening tone to them. It helped with the look of the film and how it keeps you edge throughout. The other thing that I liked about Wan’s direction was the way that he manages to get the performances to fit this film’s dark and twisted tone. This helped made some of this film’s more horrific and intense scenes work. When that happens especially with the film’s dialogue scenes, it keeps you on edge. It’s something that isn’t seen in many horror films today.

The other thing that makes this very good was its screenplay written by co-star Leigh Whannell. What makes his screenplay very good was the fact he’s able to develop each of the scenes. Every scene is methodically intense. From the jump scares to the film’s most intense scenes, it keeps you engage with the film’s story. The other thing made this good was the way that Whannell develops his characters. I liked how he takes his time to develop its characters. By giving the major characters backstories, it helped me be interested in the characters. This made me curious to what was happening in the film. The other thing that I like to talk about is its ending without giving too much away. At the time when it was first released, the ending to “Saw” felt original. It provided a great twist that works on all levels and requires you to re-watch the film. It’s very rare for an ending to make a film great, but this film did that. It’s truly one of the best endings to a horror film.

This film is worth checking on in theaters this week for fans of the film or newer horror fan who haven’t seen it yet. “Saw” still has the same shocking and intense action that it had back in 2004.