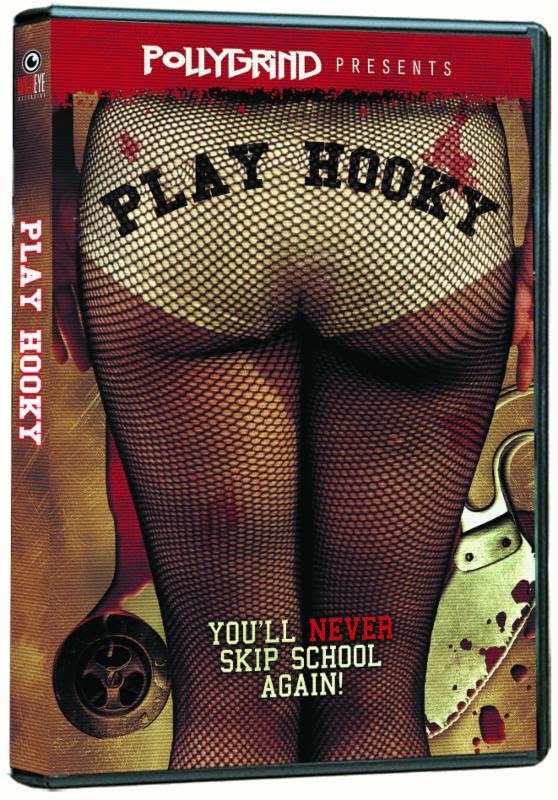 “Play Hooky” is the first film under the new Pollygrind Presents label which is being distributed by Wild Eye Releasing. It grabbed my interested, because I was interested in seeing what this new label had to offer.

The film follows five high school students who skip school to party. They come across an abandon hospital and break into it. The place is known for many strange occurrences in its history. Their day of partying will soon turn into a fight for survival as someone or something has its sights on them. Can they find a way out of this notorious hospital before it’s too late?

I was surprised that I enjoyed “Play Hooky” considering the fact that I didn’t know what to expect from this film. One of the reasons that I enjoyed this film was its direction. Co-writer/director Frank G Petrilli does a very good job in the way that he approaches his direction and the filming of this. This film felt like something that I’ve haven’t seen before. Most of it was the way that he had “Play Hooky” filmed. Instead of using traditional means to capture the images, Petrilli along with his director of photography used a flip camera to capture everything. Normally would be trashing his methods for using a flip camera because it looks home made, but it’s perfect for a film like this to capture the found footage feel. It added something that you don’t see in other found footage films. The other thing that I liked about it was the fact that Petrilli does a good job directing his cast. He makes sure that the performances weren’t annoying or overacted. It helped especially with the first half of the film, as you’re getting to know these characters and not being turned off by them. It’s something that’s needed to keep your interest in a found footage film.

The screenplay written by Petrilli, Jason Chester and Vincent Kulish was good. What made me interested in the screenplay was it allowed you to get to know the characters. It got me interested with the story throughout the film. If there was one problem that I had with it, the fact that it spends a little too much time on them. I would’ve liked a little more horror action especially in the middle part of the film. Once it got to that part, it became a different film for the better. The other thing that I liked about their screenplay was the way the twist work. I was going into this film thinking it was going to be the typical found footage film that dealt with something paranormal but it turns into something different. It made it a more enjoyable for me, as this was something that I wasn’t expecting.

The first extra on the disc is the audio commentary track featuring co-writer/director Frank G Petrilli, Co-writer/actor Jason Chester, co–writer/actor Vincent Kulish, Actress Kim Kleemichen, Editor Peter Jay Gould and Pollygrind Film Festival founder Chad Clinton Freeman. This was a good track, as they do a good job talking about the film and the stories about its production and cast. It worth listening too for fans of the film.

Next, the disc has three bonus scenes that features three faux interviews with three of the film’s minor characters. This fits in very well as an epilogue to this film. After that, the disc wraps up with an introduction from Pollygrind Film Festival founder Chad Clinton Freeman, Two Short films, “The Bet” and “Kuriosity Kills”. Both of which you should check out if you have this disc and trailers for “Play Hooky” and other Wild Eye Releasing releases.

“Play Hooky” is one of those films that’s able keep your interest through its characters and its storytelling. Check this film out, if you’re a fan of found footage films.