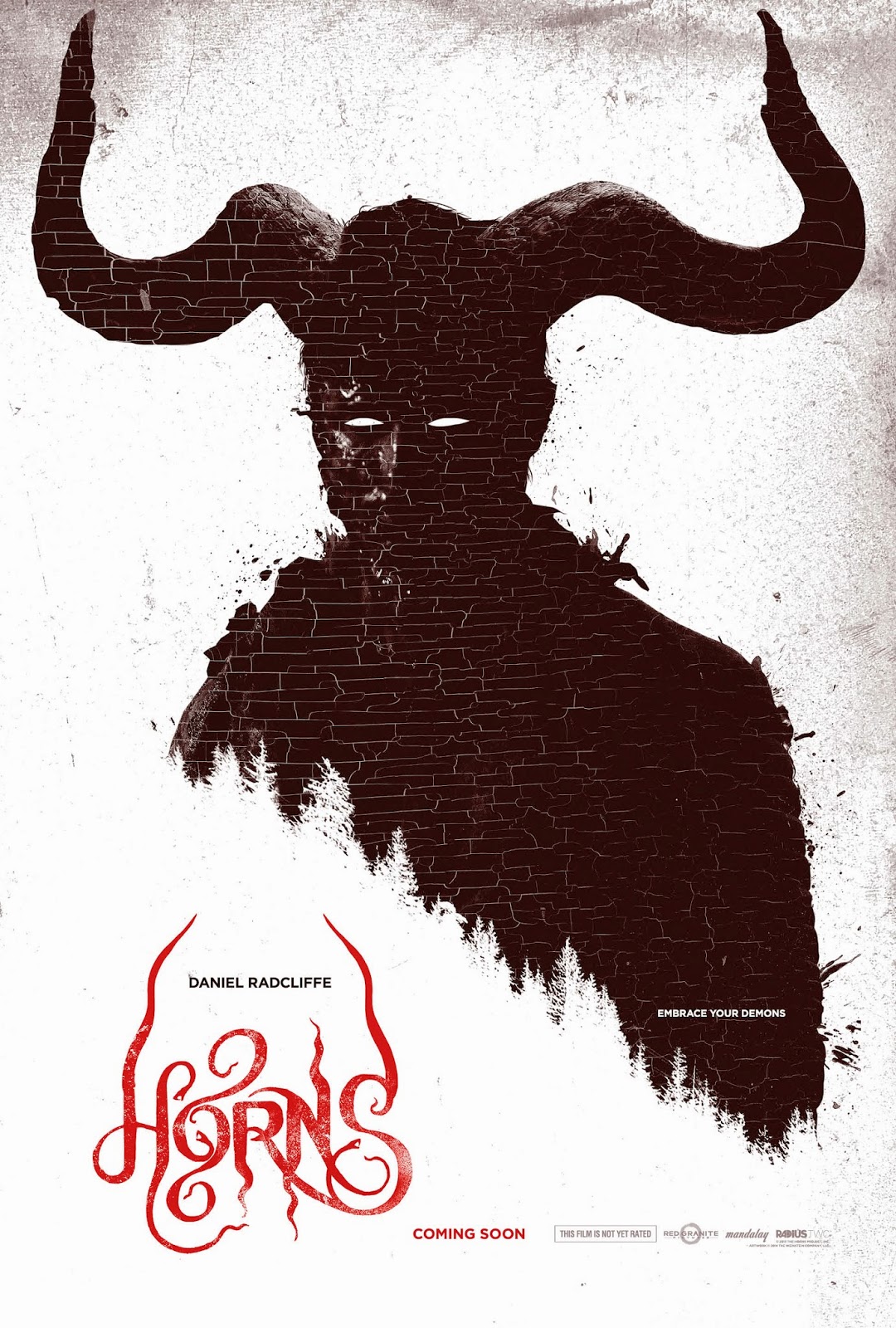 Horns is a great novel written by Joe Hill, son of the legendary Stephen King. Unfortunately when it comes to the film adaption, as is so often the case, that greatness is lost in translation.

The mystery of a man, possibly wrongly accused of killing the love of his life, who wakes up one day suddenly in possession of surprising supernatural abilities that can help him discover the truth of his lover's death, Horns as a novel is an amazing dark comedy about love, revenge, and the horrors hidden within the human soul. And Alexandre Aja's movie, screenplay by Keith Bunin, does cover all those bases. It couldn't help but be dark, what with the main character Ig, played by Daniel Radcliffe, slowly transforming into a devil who can manipulate people's sins. And Radcliffe is absolutely captivating; he plays Ig with a perfect combination of desperation, anger, and horror, and when he wakes up and spontaneously sprouts horns, he is absolutely hysterical as people start spilling their secret sins and desires to him.

The problem is that other than Ig, all the other characters in what should really be a story with four leads get shorted when it comes to characterization. Joe Anderson is great as Ig's brother Joe, but we get nothing about him other than he's a drug-addled musician. Max Minghella is awful and one-note as Ig's best friend Lee, but even his monotone performance is made worse by characterization no deeper than "best friend and lawyer." Juno Temple, meanwhile, is positively luminous as Merrin, the deceased girlfriend who obviously only appears in pictures. But even she gets the short end of the characterization stick; all we learn about her in flashbacks can be summed up by "dead mother, Ig's girlfriend, deceased." And it's absolutely astounding that that's all we get from those flashbacks, considering they take up half the movie, to the detriment of all the other characters and what's going on in the present. Without being given enough to go on to care about the characters and what happens to them, the emotional beats of the story, rushed as they are, fall flat.

I won't go into specifics to avoid spoilers, but even Ig's transformation is rushed, which is a shame, because his transformation is key to the whole story. It's a shame. Horns is a dark, funny, beautiful love story about darkness, vengeance, and redemption, and it had the potential to be a great movie. I'd been looking forward to it for quite some time, but what we got instead was a story of stilted characters going through a fairly boring plot, the whole thing only slightly enjoyable because of Radcliffe's performance. It's for him alone and how awesome he looked in those Horns that I'm generously giving those movie 2 out of 5 stars.