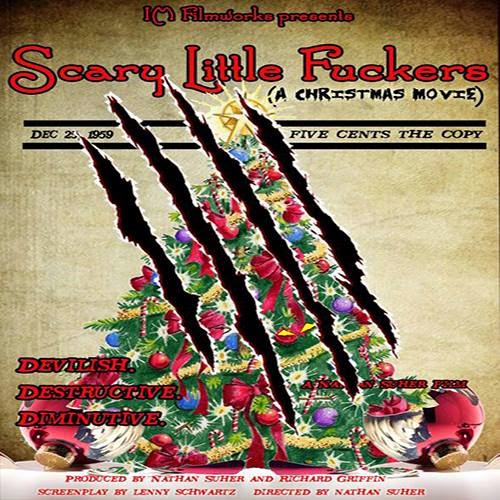 IM Filmworks recently send us over information regarding their upcoming Christmas horror themed short film "Scary Little Fucker". The film is set to start shooting in December and is co-produced by Richard Griffin (The Disco Exorcist, Exhumed). The filmmakers have recently started an IndieGoGo campaign to raise funds for the film.

To contribute to the IndieGoGo Campaign, you can goto: https://www.indiegogo.com/projects/scary-little-fuckers-a-christmas-movie

For more information on this film, you visit the film's official Facebook page at: https://www.facebook.com/pages/Scary-Little-Fuckers-A-Christmas-Movie/287906034690972

Also, don't forget to check out the pitch video at the bottom of the post.

IM Filmworks’ next film, SCARY LITTLE FUCKERS (A CHRISTMAS MOVIE), begins production December 2014.The film, a horror/comedy parody of the 80’s cult classic GREMLINS, is directed by Nathan Suher and co-­‐produced by Suher and Richard Marr-­‐Griffin.

Suher states, “I’ve never been a fan of straight forward horror because I don’t believe there are many recent films that transcend the genre. SCARY LITTLE FUCKERS (A CHRISTMAS MOVIE) lampoons these films and adapts the classic horror genre into something new and entertaining.”

Co-­‐producing the film is director, Richard Marr-­‐Griffin, New England’s most prolific and successful independent filmmaker, who has secured global distribution deals for many of his films.The accomplished screenwriter is Lenny Schwartz, a playwright and screenwriter who has had many of his scripts produced for film and stage.

For more information on how to contribute to the film, visit http://tinyurl.com/pkushs6.