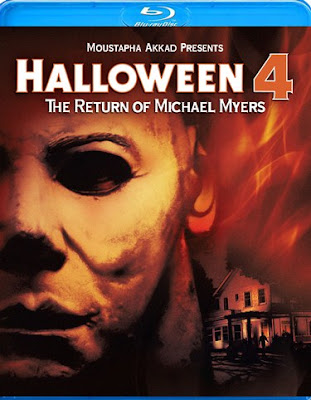 This week on Anthony T’s #TBT, With Halloween approaching, I decided to go back and revisit my “Halloween 4: The Return to Michael Myers” review. It’s one of the best “Halloween” sequels of the bunch. With further ado, here my review and I hope everyone has a Happy Halloween.

“Halloween 4: The Return of Michael Myers” is viewed to me as one of the best sequels in the Halloween franchise.

The film takes places years later after the events of Halloween 1 and 2. After being comatose for so long, Michael Myers wakes up while transferred to another hospital. Once he escapes the ambulance, he proceed go back to Haddonsfield for the orphaned daughter (Danielle Harris) of Laurie Strode and her Step-sister Rachel (Ellie Cornell). Standing in Michael’s way yet again is Dr. Loomis (Donald Pleasence), who is determined to stop his reign of terror once and for all. Director Dwight H. Little does a very good job with the direction here. I liked, the way that he makes the film stand out from the other entries in the series. Little does that through the way that he captures the background. From the opening title sequences to the night scenes, he does a very good job capturing the atmosphere in each of the scenes. It works especially well with the action that goes on. Little also did a very good job handling the film’s performances. The performances are what helps make the characters interesting instead of being downright annoying like the next entry of the series. I enjoyed the lead performances, as both Ellie Cornell and Daniele Harris did a very good job developing chemistry between the two. It helped bring a dynamic that you can believe their characters as sisters and also it helped with some of the film’s climatic scenes. The other thing about the direction of the acting that I liked was the fact that none of the supporting performances felt annoying. This film could’ve easily had it with the sex crazed girl, the cheating boyfriend and a bunch of truckers. Little does a very good job directing their performances. It doesn’t become distracting to the film and it keeps the film’s dark and intense tone.

The screenplay written by Alan McElroy was good here. One of the things that makes it work was his ability to tie in this film with the first two films in the series. Even though there aren’t any flashback sequences, McElroy does a very good job making reference to those films through dialogue in the beginning of the film. It explains what happened to Michael and Dr. Loomis after the events of the second film and you’re not left wondering about the continuity of the series. The other thing that McElroy does very well was developing the relationship between Jamie Lloyd and Rachel Carruthers during the course of the film. By spending time on that, it made the characters interesting and makes you invested in the characters and all the horrific action that goes on during the course of the film.

I truly enjoyed this film from start to finish. With a very good screenplay and good directing from Dwight H. Little, “Halloween 4: The Return of Michael Myers” is one of best film in the series. It’s a good way to spend the upcoming Halloween season.