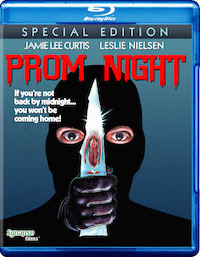 Welcome to another edition of Anthony T’s #TBT. This week, it’s my repost of my review of “Prom Night” (1980). The film recently was released on Blu-Ray for the first time by Synapse Films. From my review of the film from 4/10/2008, right before the film’s remake came out in theaters. In my review of the film, I complained that this wasn’t a special edition DVD of this film, as its previous rights holder Echo Bridge Home Entertainment didn’t released any extra on the DVD that I reviewed. Thankfully, this has been corrected as the new Synapse Films “Prom Night” Blu-Ray has a good amount of extras including a making of featurette and an audio commentary track from the film’s writer and director. Without out further ado, here’s my review of the 1980 classic horror film “Prom Night”.

Repost from April 10th, 2008 with changes from the original review.

(Please note, that this review may contain minor spoilers) With the alleged Prom Night remake hitting theaters tomorrow, yours truly decided to take a look at the original Prom Night and see it for the first time. I‘ve never seen the film until now. Prom Night is considered by many horror fans to be one of the classic slasher films of all time. The film stars Jamie Lee Curtis (Halloween, A Fish Called Wanda) and Leslie Nelsen (Airplane, The Naked Gun).

The film follows a group of teenagers who have been hiding the truth about a tragic event that ended with the death of a ten-year old child. Six years later, the teenagers are getting ready for their prom night when someone who witnessed the event hasn’t forgotten about it or them. Now this person is planning his revenge on those teens by stalking them through the dark and empty halls of Hamilton High and using his axe to strike at them. He will turn their night of fun into a living nightmare.

I wish the studio executives go back and rewatch all these horror classics, like this film and realize what makes them great were the suspense and twists of these films. Not cramming too many pretty faces only to kill them off without going into their character. The original Prom Night deserves to be up there as one of the greatest horror films of all time. Director Paul Lynch did great job building the film’s suspense by the way he shot the film. His direction at times gave me an uneasy feeling of when the killer was going to strike. Lynch’s direction of the actors was very good. They seemed like regular teenagers that didn’t come off as stupid or clichéd. But the main reason this film succeeds was William Gray’s screenplay. He does a great job making this film suspenseful. Gray able to do that by inserting subplots that make you think that this person or that person is behind this, when it’s neither. This is what makes a film suspenseful. The character development was very good here. Gray does a good job spending almost an hour of the film’s running time developing the characters and give the film its backstory, which is something I would’ve liked to have seen in some horror films that I’ve been watching as of lately (i.e. Cruel World, Unearthed). Gray also focuses on the police perspective here. He does that so the film’s twist can be effective later in the film.

There were only two problems that I had with the film. First I could not stand the disco music in the film but then later realized the film was done in the early 80’s when disco was big. The other problem was there were no special features on the DVD, which is a shame for this classic film. At least, the DVD transfer on the film was very good. Echo Bridge Home Entertainment did a good job restoring it original print, as it looked good for a film that came out in 1980. Hopefully, somebody will give this film its proper special edition release.

Please go and rent the original “Prom Night” first before you have to see the remake and tell me which version you like best. “Prom Night” is a suspenseful horror that deserves to be mentioned with some of the best slasher films out there.