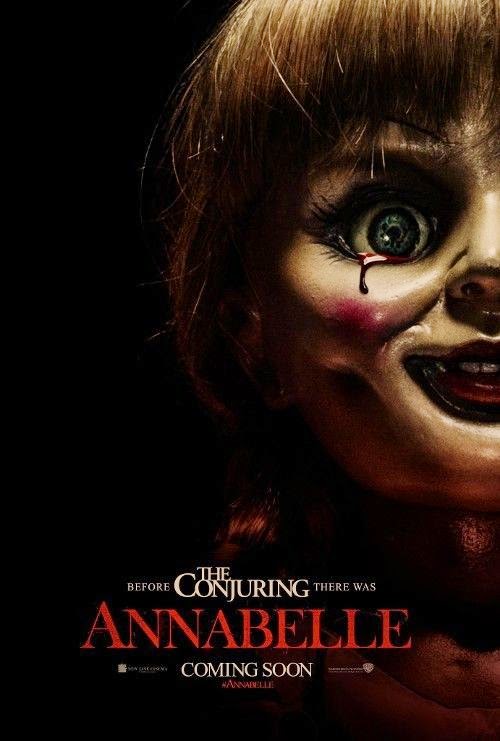 
“Annabelle” follows a couple (Annabelle Wallis, Ward Horton) who were living a peaceful life and getting ready to introduce a baby into this world. Then one night, their home is overrun by a couple of people who belong to a satanic cult and they attacked them. When the occultists are killed, the blood of one of them goes into a doll and it conjures up a demonic entity that will haunt the couple. Soon the couple becomes haunted by the doll and is forced to try to protect their baby before the deadly doll takes its soul.

Going into “Annabelle”, I was excited about this film but when the reviews started coming in for this film, I was started to feel leery about this. But with all the goodwill that I got from “The Conjuring”, I decided to check this out no matter what. What I got was a film that felt like a direct to DVD film with some good scares than a theatrical film.

One of the main reasons was the direction. It was directed by John E Leonetti, who was the cinematographer for “The Conjuring” and his only feature films to date were “The Butterfly Effect 2” and “Mortal Kombat: Annihilation”. His direction of the film felt flat for most parts. What made it flat was the way that he handled the dramatic scenes. It felt like it had no life to them, as I was feeling indifferent at times. When that happens, it doesn’t make the film or its characters interesting. The performances also felt one dimensional and you can’t have that if you’re supposed to invest in these characters. But he manages to make the film have a dark and sinister tone to it in his direction, as there were a couple of good scares. Leonetti at least he took his time to make some of the scarier scenes work. If that was also flat like most of his direction, then I would be viewing this as one of the worst I’ve seen this year.

The screenplay made me wish the writers of “The Conjuring” were handling this because this screenplay felt week and rushed. It was written by Gary Dauberman, who has only written the screenplays for direct to DVD films like “Swamp Devil”, “In a Spider’s Web” and “Bloodmonkey”. His screenplay had little or no character development. The characters felt uninteresting and dull for the most part. The only time that I cared about them was when all the action scenes were happening, as the haunting scares worked for me. There were a lot of scenes that went by fast and felt rushed at times. Dauberman doesn’t give them the dramatic scenes a chance to develop. That’s what made this film move at a fast pace when it didn’t need to be. The horror elements were good here, but the dramatic scene to help make the characters interesting felt completely flat. This is why this film feels one dimensional for most of it.

Sadly, the failure of this film has to fall on Warner Bros. What the hell they were thinking. It’s an okay film but this film is something that should have been released on DVD and Blu-Ray, not theaters. The reason that I specified most of the director’s and writer’s filmography is to show the fact they made this film on the cheap and they hired people with no credibility in their filmography. I didn’t expect to see a “Paranormal Activity” type of film like this felt. At least, those films had directors and writers that had films that played in theaters before their entries. This has a director that has done a direct to DVD sequel and a failed theatrical sequel and a screenwriter that has written a couple of screenplays that look like Syfy original films. I would be very surprised if this film cost over $15 Million to make and that’s being generous because it looked like it was made for under $10 Million.

Should you go see this in theaters? Probably not. “Annabelle” looked like a rush job in every way but it’s scary enough from not making this a complete disaster. I’m afraid that this film is going to hurt “The Conjuring 2 at the box office next year.