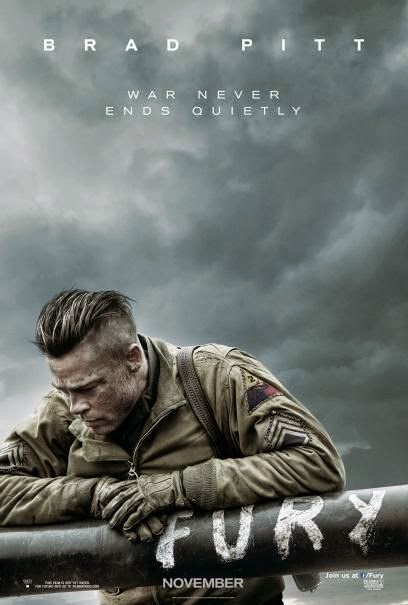 World War II war flick written and directed by David Ayer (who also performed both duties on multiple cop movies like 'END OF WATCH', 'HARSH TIMES' and 'SABOTAGE'; he also wrote 'TRAINING DAY' and directed 'STREET KINGS'). It stars Brad Pitt as a U.S. Army Staff Sergeant leading a crew of men into battle in Nazi Germany, in a Sherman tank, on the last days of the European Theater. It costars Shia LaBeouf, Logan Lerman, Jon Bernthal and Michael Peña. It's pretty gruesome, and very dark, but also a fitting tribute to the soldiers who gave their lives in that hellish war.

The story takes place in April of 1945, as the Allies battle bravely to take control of Nazi Germany; during the last month of the European war. Pitt plays Don 'Wardaddy' Collier; the leader of a M4A3E8 Sherman tank, and it's five-man crew. The film centers on each man as they horrendously fight off Nazi soldiers, behind enemy lines. It especially focuses on the relationship between Wardaddy and an inexperienced private, named Norman Ellison (Lerman).

The movie is very bloody, and disgustingly violent, and there is some controversy over how accurately it depicts the horrors, and atrocities, of World War II. One of the technical advisors on the film, a World War II tank gunner named Don Evans, says the violence shown, in the movie, is much worse than he remembers (and he wasn't looking forward to seeing it, on the big screen). All of Ayer's films are extremely brutal though, and he did grow up in South Central Los Angeles, so if you can stand the gore I'd definitely still recommend it. The directing is technically (near) perfect and the character study, being presented, is extremely fascinating. I especially like the performances of LaBeouf (one of my favorite actors) and Lerman. Pitt is really good too (but he still always seems like Brad Pitt, in the movie). If you like and respect war films I'd definitely recommend this movie!
at 8:45 PM
Labels: Brad Pitt, Columbia Pictures, Fury, Reviews, Shia LeBeouf, Sony Pictures