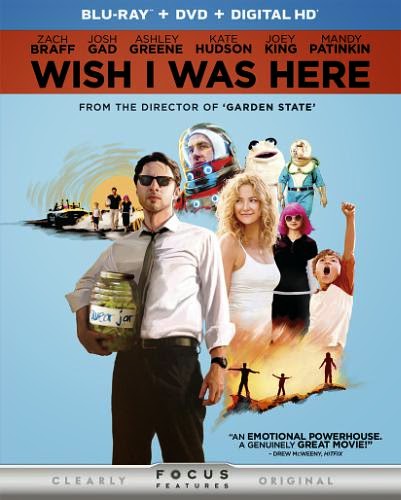 
No special features were announces at this time. "Wish I Was Here" hits Digital HD on October 14th and DVD and Blu-Ray October 28th.

After his indie breakout hit Garden State, filmmaker Zach Braff returns with Wish I Was Here, a comedy-drama about what it means to be at a major crossroads as a parent, spouse, and child – all at once. One of the most notable films at this year's Sundance Film Festival, Wish I Was Here will be available on Blu-ray™ Combo Pack including Blu-ray™, DVD and DIGITAL HD with UltraViolet™ on October 28, 2014 from Universal Studios Home Entertainment. The film will also be available two weeks early on Digital HD October 14, 2014.

Aidan Bloom (Braff), a husband and father and struggling actor, lives in Los Angeles with his wife Sarah (Academy Award nominee Kate Hudson) and family. After an announcement from his own father Gabe (Mandy Patinkin of Homeland) disrupts Aidan's day-to-day existence, his decision to homeschool his children Grace and Tucker (Joey King of Fargo and Pierce Gagnon of Looper) will lead him on an unexpected journey of discovery about fulfillment and family.