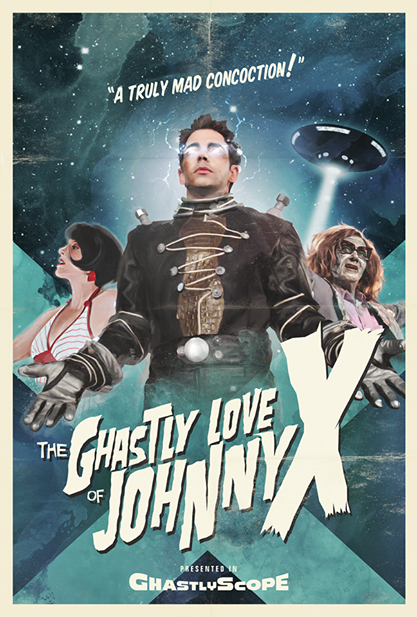 'THE GHASTLY LOVE OF JOHNNY X': Four and a Half Stars (Out of Five)

Sci-fi musical comedy flick about a gang of deliquent misfits, from outer space, who are exiled to earth and trying to find their way home. It was produced and directed by Paul Bunnell and written by Bunnell, Steve Bingen, Mark D. Murphy and George Wagner. The film stars Will Keenan in the title role (who's probably most well known for playing Tromeo in the Troma flick 'TROMEO AND JULIET') and it also features a supporting cast which includes Creed Bratton (Creed of 'THE OFFICE' fame), De Anna Joy Brooks, Reggie Bannister (of 'PHANTASM' fame), Les Williams, Jed Rowen, Kevin McCarthy (of 'INVASION OF THE BODY SNATCHERS' fame) and veteran actor Paul Williams. The movie was made on a budget of just $2 million and was the lowest grossing film of 2012! I found it to be a pretty amusing and fun time at the movies.

The movie begins, in outer space, with Jonathan Xavier (Keenan) being exiled to Earth by The Grand Inquisitor (McCarthy). Johnny then spends his days causing trouble, on Earth, with his gang of troublemaking friends. His girlfriend Bliss (Brooks) recently dumped him and ran off with his 'Resurrection Suit'; which is a powerful uniform that can control others. Johnny will now stop at nothing to get the suit back and win back Bliss's love. Multiple musical numbers follow as the plot also involves Johnny's gang helping a music promoter (Bannister) put on a show with a dead rock star (Bratton).

I really love the style and enthusiasm of this 50s throwback sci-fi flick. Bunnell really got the mood and feel right; of the B movies from that era. I'm not from the 50s but I remember watching a lot of movies from that time period, growing up as a child, in the 70s and 80s. So even for me this movie has that magical 50s nostalgic feel. The acting is all good and the music numbers are well done and catchy as well. It's definitely not a flick for everyone, some will find it downright stupid and silly, but it should more than please it's target audience (if they ever see it).
at 5:59 PM
Labels: Reviews, Strand Releasing, The Ghastly Love of Johnny X