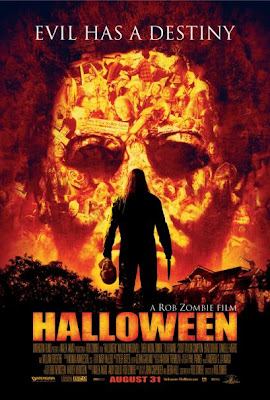 Hello, this Anthony T. I’ve been writing for Film-Arcade.net since it first launched back in January 2008. Recently, we had to create a new site due to having problems keeping our original web address and our hosting provider ceasing operations.

Throwback Thursday on Film-Arcade.net came about after seeing endless throwback posts on various Facebook Pages. It gave me the idea to post my past reviews and interviews on the site. My earlier reviews weren’t great but I decided to go back and edit my past reviews here to give you a feel what the earlier days of Film-Arcade.net were like for me. I’m starting off with my first review “Rob Zombie’s Halloween”, which was apart my “Reviews from the Horror Chamber” column that I had at the way. Was I ever wrong to think that there would be a sequel to Ron Zombie’s “Halloween", but it happened in 2009.

Repost from January 9th, 2008 with changes from the original review.

For all the bitching I did on Myspace about this remake of John Carpenter’s “Halloween”, which is one of my 50 favorite films of all time. My inevitable review of Halloween (2007) is here. This is Rob Zombie’s revision of John Carpenter’s classic film.

The film focuses on a young kid named Michael Myers, who murders three people including his sister and his mother’s boyfriend (William Forsythe). Sixteen years later, Michael (Tyler Mane) is institutionalized and escapes from a mental hospital. He returns to the town of Haddonfield to stalk a shy teenager who is his younger sister (Scout Taylor-Compton) and her friends (Danielle Harris, Kristina Klebe). Soon his doctor (Malcolm McDowell) tracks him down and must stop his killing spree before he kills the only living family member left. Sherri Moon Zombie (The Devil’s Rejects), Brad Dourif (Child’s Play, The Lord of the Rings: The Two Towers) and Danny Trejo (Grindhouse, From Dusk to Dawn), Dee Wallace Stone (The Howling), Richard Lynch (Bad Dreams), Clint Howard (Ice Cream Man), Udo Kier (Shadow of the Vampire) and Sid Haig (The Devil’s Rejects) all co-star in the film.

I sadly take back everything I said about this film pre-release because I really liked this film. Rob Zombie did a very good job with this film, especially the first part of the film where it was mostly a psychological horror film. His screenplay did deliver on the scares and suspense, while adding grindhouse elements that makes it shocking. Michael Myers is also made to be more human like unlike the original film, which helped the film be different from the original. Also I liked how the movie ended abruptly, as there is probably no room for sequel to this reincarnation, which is good.

The acting in this film was very good. Both Malcolm McDowell and Scout Taylor-Compton bought different things to the roles compared to the original. I thought McDowell brought a more sinister look to the Dr. Loomis while Taylor-Compton brought more of an innocent and scared look to Laurie Strode. Another person who surprised me in this project was Sherri Moon Zombie. Besides being the wife of Rob Zombie, who knew that she could act. She really nailed her role down, as Deborah Myers especially with her scenes with young Michael were great.

While this version of “Halloween” was different from the original version of John Carpenter’s “Halloween“(which I still think it’s better than this), Rob Zombie does deliver on the frighten aspects of Michael Myers and his screenplay. Rob Zombie’s “Halloween “will not be a disappointment to those fans that love the original.