"House of the Witchdoctor" Review - Written by Maynard M 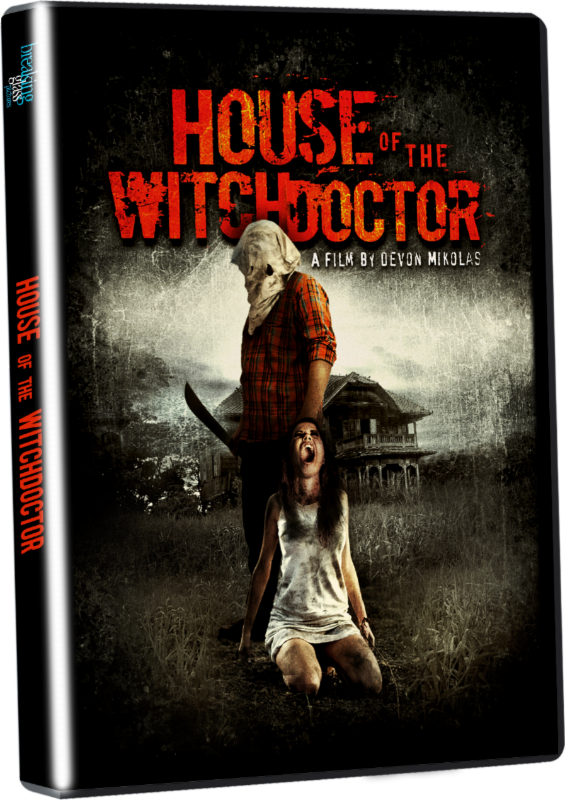 Review:
HOUSE OF THE WITCHDOCTOR

When I first heard of that film, I thought "Dayum, House of the Witchdoctor - that's a fantastic title!", and immediately started to hum that old "Witch Doctor" song by the Chipmunks ("Ooh eeh ooh ah aah..."), which isn't exactly a good sign because I actually hate that song - and as if it was a bad omen, the movie itself turned out to be quite a turd, and that sucks because there is definitely a good film hidden inside this turd.

"House of the Witchdoctor", the feature debut of New-York-based filmmaker Devon Mikolas follows a young girl who spends the weekend with her friends at her parents' home to mourn the anniversary of her boyfriend's murder. Things take a turn for the worst when two vicious drug-addicted criminals break into the house, attempting to rape and/or kill the five boys and girls, not knowing that there's something evil hidden in the basement...

The movie has a certain 70s or 80s feeling to it, a feeling that reminded me of rape'n'revenge classics like "Last House on the Left" or "I Spit on your Grave", as well as of low-budget slashers like "Iced" or "Home Sweet Home". Actually, "House of the Witchdoctor" could have been a fabulous little low-budget chiller if made in the early 80s, maybe by an imaginative director like Tony Maylam or Joseph Ellison.

Unfortunately, it was made in 2013 by an unexperienced and rather unimaginative director, with a cast that ranges from so-so to horrible, and a haphazard sceenplay that tries too hard to come off as wild and clever mix of home invasion, oldschool exploitation and devil/voodoo-themed horror film, but completely falls flat because it's trite, hackneyed, way too foreseeable and totally lacks any originality.

The acting... oh well. Horror-legend Bill Moseley ("TCM 2", "House of 1.000 Corpses", "The Devil's Rejects") gives a really disappointing performance and constantly looks as if he has no idea what he's doing in this film. The scene where he's trying to do a few dance moves - unintentionally laughable. Acting legend Leslie Easterbrook ("Police Academy 1, 3-7") is equally disappointing and looks as if she was on drugs during shooting. Yet, the supporting cast is even worse, especially the unwatchable acting of Jonathan Helvey (dude, do you have any idea what you're doing?) and Summer Bills (girl, please, just shut up and go home!).

The only one who gives a plausible and rather badass performance is Allan Kayser ("Night of the Creeps"). His character is shallow and one-dimensional, just like all the other characters, but he's the only one I enjoyed seeing. Whenever he appeared, I cheered because his rude and crude manner is just fun. Also, he gets to say lots of hilarious lines like "I axed you why your girl is dressed like a two-dollar Tijuana hooker?" or "No offense, I'm sorry... sorry your bitch looks like a whore."

Also worth mentioning: the beautiful-as-always cinematography by regular-Patrick-Rea-collaborator Hanuman Brown-Eagle ("Nailbiter") and the wonderfully subtle score by Christopher Farrell ("Nightmare Man"). Other than that, "House of the Witchdoctor" is nothing but a huge letdown that doesn't live up to its fantastic title.

Oh btw, did I mention how unbelievably misleading the cover is? Oh shit, it looks more like a
at 8:02 PM
Labels: Bill Mosley, Breaking Glass Pictures, House of the Witch Doctor, Reviews