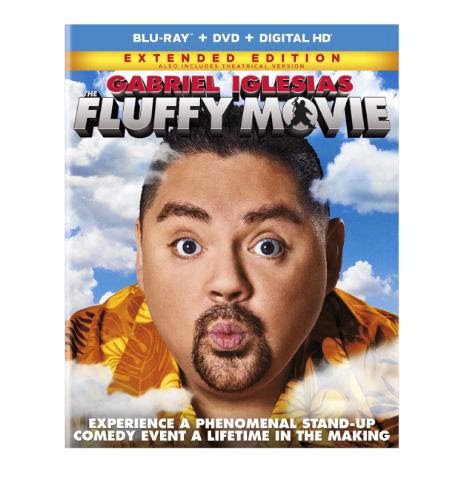 Universal Studios recently announced the upcoming Blu-Ray and DVD release of "The Fluffy Movie".  Gabriel Iglesias' stand up comedy film hopes to find an audiences on DVD and Blu-Ray after a lack luster theatrical run.

No special features were announced at this time. "The Fluffy Movie" hits stores on October 21st.

Laugh out loud with one of the most entertaining stand-up comedians of all-time when the side-splitting comedy, The Fluffy Movie arrives on Blu-ray™ Combo Pack and DVD on October 21, 2014 and DIGITAL HD with UltraViolet™ on October 7, 2014 from Universal Studios Home Entertainment. In addition, the Blu-ray™, DVD and DIGITAL HD feature an exciting extended edition of the film providing exclusive never-before-seen footage from this year's sold-out "Unity Through Laughter" national tour with Gabriel "Fluffy" Iglesias.

"Fluffy," the world-famous Hawaiian shirt-clad comedian, takes viewers on a joke-filled journey into his life in this nonstop laugh fest. The funnyman delves into subjects such as the joys of parenting a teen, the similarities between India and Mexico, and more amusing observations. See "Fluffy" himself unleashed, as he puts his animated storytelling, spot-on impressions and vivid sound effects on display before audiences around the world in this must-own comedy event.
at 8:33 PM
Labels: DVD/Blu-Ray News, Gabriel Iglesias, The Fluffy Movie, Universal Pictures