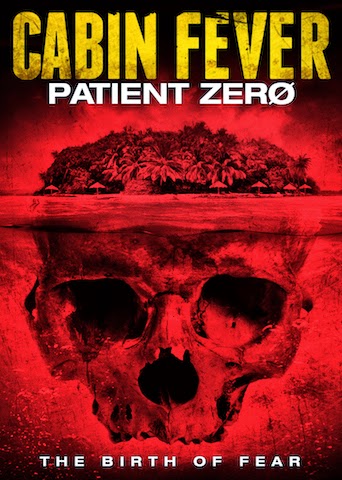 
Prequel to the first two 'CABIN FEVER' films, revolving around how the gruesome virus originally broke out. It was directed by Kaare Andrews (who previously helmed the 2010 horror flick 'ALTITUDE'and a segment of the 2012 anthology thriller 'THE ABCS OF DEATH') and written by Jake Wade Wall. The movie stars Sean Astin, Mitch Ryan, Jillian Murray, Brando Eaton, Ryan Donowho, Claudette Lali and Currie Graham. It delivers the same over-the-top gore and claustrophobic suspense, as the first two films, but not nearly as much of the dark and witty humor; that made the original movie such a cult classic.

Astin plays Porter; the sole survivor of a deadly flesh eating virus, which kills all the other residents on a remote island. A scientist named Dr. Edwards (Graham) captures Porter and keeps him in a lab, while his research team tries to create a vaccine. After months of being held captive Porter becomes obsessed with breaking out. He causes a lockdown, by spreading the virus to others in the lab. At the same time four friends, celebrating a bachelor party, arrive at the island on a boat.

Eli Roth's original film is a horror movie classic! Ti West's sequel did a pretty good job of continuing the franchise in possibly an even grosser and more disgusting way. This prequel has plenty of grotesque gore, and is somewhat scary, but it lacks the clever wit and nasty thrills that made the first two movies much more memorable (especially Roth's original). Astin is good in this installment and the directing is decent but it's definitely no cult classic.
at 5:51 PM
Labels: Cabin Fever: Patient Zero, Image Entertainment, Reviews, RLJ Entertainment, Sean Astin