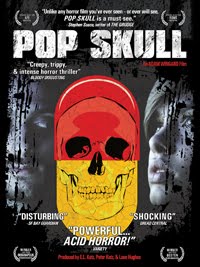 Welcome to another edition of Anthony T’s #TBT. With Adam Wingard’s (Your Next, The ABC’s of Death) latest film “The Guest” hitting theaters in limited release this week, I decided to go back and pull out a review of one of Wingard’s earlier films “Pop Skull”. It’s amazing how far he come as a director from this film to “Your Next”.

While also going through this review, I noticed that the screenplay was co-written by E.L. Katz, who directed the shocking film “Cheap Thrills” which I highly recommend you check out. The film available on DVD and Blu-Ray. Here's my review of Adam Wingard's "Pop Skull

Repost from March 23rd, 2010 with changes from the original review.

“Pop Skull” is a film that has won grand jury prizes at the Indianapolis International Film festival and Boston Underground film festival. It has also been premiered at the AFI Film Festival and internationally at Rome Film Festival. Now, the film has been on DVD for a couple of months now.

This shocking film is about Daniel, a young Alabama pill addict who has increasingly become addictive to pills and drugs. His downward spiral becomes worst, when he collides with deadly sprits that begin to inhabit his house and haunt him. Soon, Daniel discovers that the home holds a deadly secret. As the force’s presence grows stronger, Daniel must stop these forces or else those murders are doomed to repeat again and destroy his life.

There are few films that you would be guaranteed to come out feeling like that you’ve just been on one bad acid trip, like for example Darren Afronosky’s first two films. “Pop Skull” was one of those films that it never lets up, as this becomes an acid trip in the first few minutes and never stops. The film also is one of those films where you’ll watch the whole film and be horrified or you’ll just turn it off ten minutes into the film and never look back.

“Pop Skull” relies mostly on Adam Wingard’s direction. The direction here was very good, as he goes for a very chaotic approach when directing and shooting some of the film’s most horrifying images and scenes. He makes the imagery very dark, by using various techniques as there were some scenes that were full of color and some that were dark and very bleak. This is where the acid trip analogy comes into play. Wingard also blends some of the film’s images together to give its surreal tone. He blends them in to give the viewer an experience that frightens your senses and mind. Wingard also does a good job making performances work within the context of the story, as they were very dark especially the lead performance, as I was sold on the fact that his character is on a downward spiral and losing control of himself. The performance helps makes this film, very effective.

The screenplay written by Wingard, Lane Hughes and E.L. Katz does a good job creating a level of suspense and shocking images. One of the reasons was that the writers did a good job focusing the film around a character, whose life is spiraling out of control. They do that, by going into the character’s state of mind. By focusing on all of his problems and how his addiction to pills has changed the way that he looks at everything, it gives a frightening aspect into how addictions destroy people. The writers also do a very good job making some of the film’s scares works. The reason that they work is the fact that they come out of nowhere. You have all of this bizarre imagery that grabs your attention to the point that you want to know how this is going to play out. This is a very well crafted and shocking film. “Pop Skull” is a frightening and visually horrifying look at drug addiction and how it destroys people.