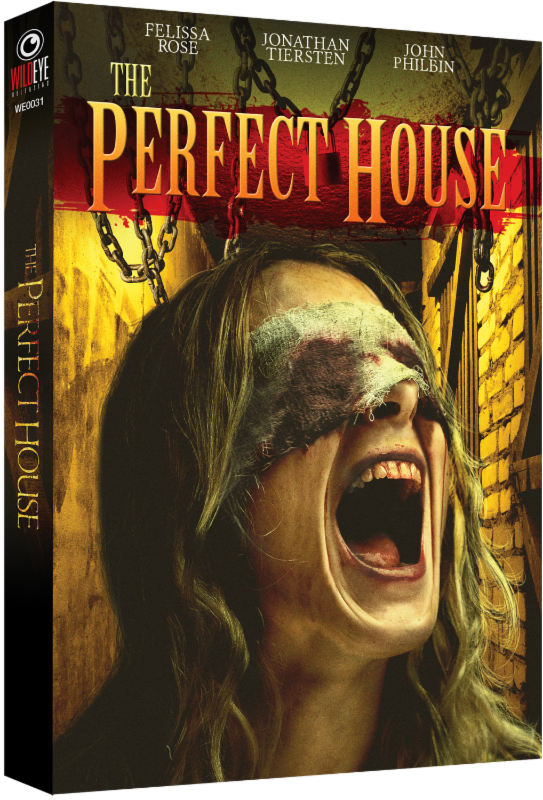 When I came across the trailer for “The Perfect House”, I immediately liked the trailer as it look very frightening and something that I would be interested in watching. Still, I had the thought that the trailer made the film look like a “Hostel” rip off. I decided to review this film on the site because I thought everything else in the trailer looked very well and there was positive press on it.

The film is about a young couple who moves into their dream house. The only problem is the house has a very dark past, as there have been three generations of families that met their demise at this house. Soon, the couple must to save their lives before they become of the house’s doomed history. The film stars Felissa Rose (Sleepaway Camp), John Philbin (Children of the Corn, Return of the Living Dead), Johnathan Tiersten (Sleepaway Camp), and Monique Parent.

Going into this film, I thought that this was going to this going to be more of a straight forward horror film, but I was surprised that this played more like an anthology film. Still, I enjoyed this film. “The Perfect House” might be the most bloodiest and gruesome film that I’ve had a chance to review in a while.

One of the reasons I liked this film, its direction. Both Kris Hulbert and Randy Kent did a good job with their direction. One of the things that makes the direction good was the fact they made sure some of the film’s scenes were horrific and downright shocking to watch. There were a couple of scenes where I had to cover my eyes. That’s a credit to the way they handled the gore effects. The other thing that makes this good was the way that they handled the performances. The directors do a good job making sure that their cast put in effort into their roles. There were some very good performances here including Johnathan Tiersten and Holly Green in the film’s second segment Chic-ken and Monique Parent as the sexy real estate agent in the film’s wraparound segment. The performances and the direction helped made the film worth my time.

The screenplay written by co-director Kris Hubert was very twisted. What I liked about it was that all of the stories had a twisted and demented feel to them. He does a very good job spending time to make all of the stories including the film’s wraparound segment entertaining. It didn’t feel repetitive and it made me enjoy this film a lot more as every story felt different. This is one of the things that’s needed for an anthology film to work. The other thing that he does very well is make the tone of film feel very demented. Hubert does that well by creating violent scenes in his screenplay process and making sure that they had a shocking tone to them. It made for some very bloody and twisted moments that made me shocked at what I saw.

There are a lot of extras on this disc. First, it’s the film’s behind the scenes featurette. It’s divided into five chapters “Meet the Crew 1 &2”, “Meet Monique Parent” “Meet John Philbin” and “Meet Chris Rabb”. I thought, they were all too short in length and the interviews were too brief. It would’ve worked better a regular featurette with more time to the interviews instead of five short segments. Next on the disc is “The Creation of “The Perfect House RV”. It’s pretty much a boring featurette that wasn’t interesting. After that, is “On the Road” This featurette goes into how the publicity was created for the film’s road tour and Facebook release. It’s an interesting look at the publicity side on an indie film. It’s something that you don’t see in DVD releases, as it gives you another side of the industry. There’s a lot more features after that including “Basement Walkthough”, “Buffalo Facebook Countdown to the Premiere, “Buffalo: TV Press”, Original Spec Trailer, Audience Trailer Q &A Highlight Reel and Alternate Ending.

If you’re fan of bloody and demented horror films, this film will definitely fit well in your DVD collection. “The Perfect House” is a very twisted and gory horror film that will shock you in many ways.