"Sin City: A Dame to Kill For" Review - Written by Jim Herling

Sin City: A Dame to Kill For, written by Frank Miller and directed by Miller and Robert Rodriguez, is the long-time-coming sequel to the 2005 film Sin City. And despite the long wait, it's very much more of the same: hard-boiled detective noir told in thinly connected vignettes; fun splashes of color breaking up the black and white of the rest of the movie; and characters that are both completely unbelievable and unbelievably entertaining.

So why then did the sequel feel inferior to the original for me? 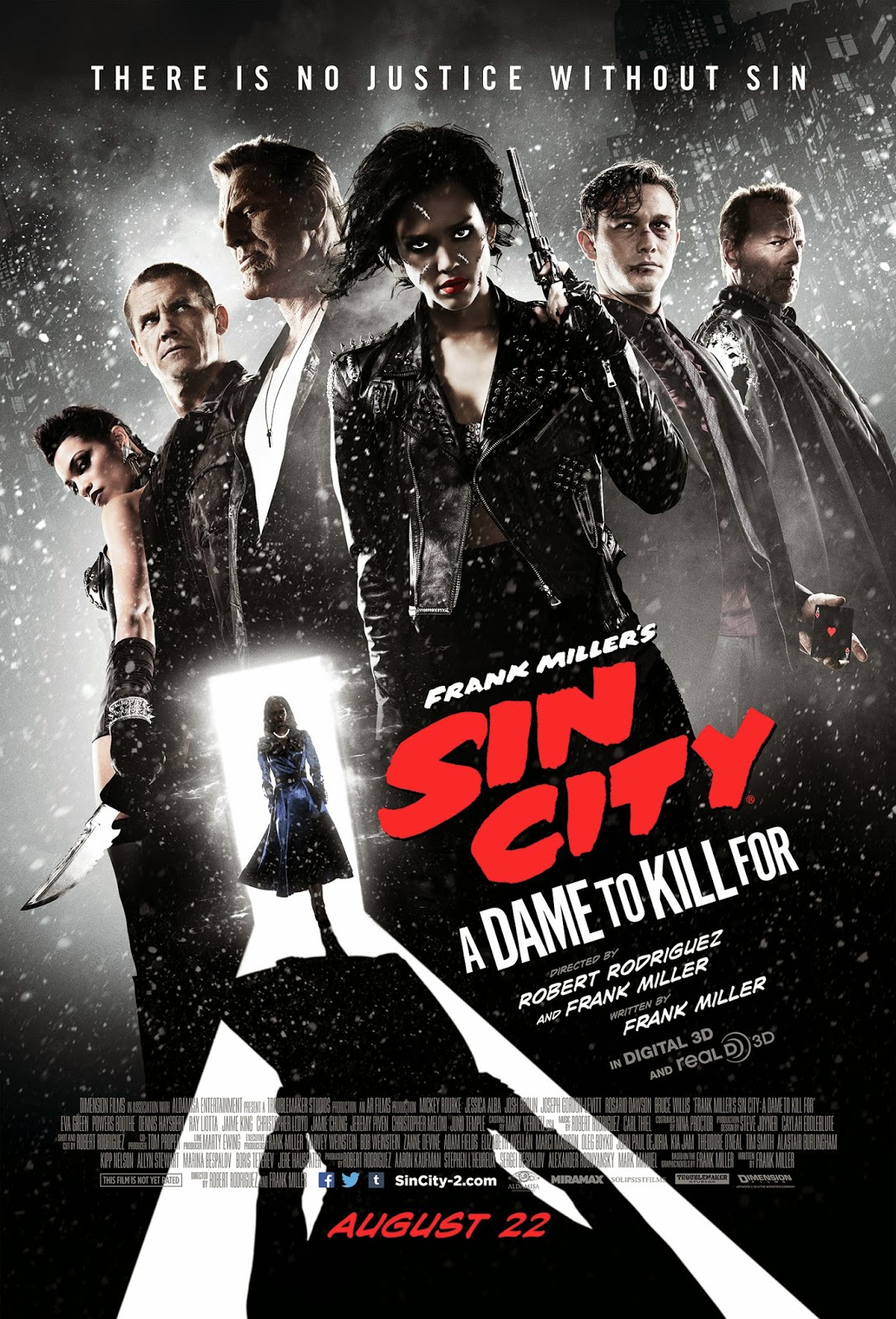 Maybe it was just a little too much more of the same for me. I had hoped the intervening years in the long wait would have led to more than just a rehash of the first movie, more than just an episodic movie with the same characters. Other than Joseph Gordon-Levitt's Johnny, the heroes of the piece are all the same as the original. There's Jessica Alba's incredibly sexy stripper Nancy and the ghost of her cop lover, Bruce Willis' Hartigan. There's Dwight, played by Clive Owen in the original and Josh Brolin this time around (don't worry, it's not a case of replacement casting, although there is some replacement casting in the cases of Dennis Haysbert as a new Manute and Jamie Chung as a new deadly little Miho; there's a storyline reason for the Dwight switch mentioned in the original that makes sense and works flawlessly until they try to CGI Josh Brolin to resemble Clive Owen and then, well, shudder). And then there's Marv, played by Mickey Rourke, who is all over this movie despite having been executed in the first one. Seriously. He's the star of the opening vignette, appears in the background in Johnny's story, and plays second-fiddle to both Dwight and Nancy in their stories. The only other new main character is Eva Green's Ava, the titular Dame featured in Dwight's story, a woman who wraps both Dwight and Christopher Meloni's Mort, the only other new character worth mentioning, around her ample, umm, finger. And Powers Boothe rounds out the cast as Senator Roark, a returning villain for Johnny, Marv, and Nancy.

Aside from the sameness to the original and the over-saturation of certain characters, the CGI was another flaw for me. I already mentioned how awful and distracting the Brolin/Owens Dwight hybrid was. The color effects were also used much less efficiently than in the original. They were less of a striking contrast this time around and more just there.

But what I can't complain about is the dialogue. It's cliched and hardboiled and more than a little absurd at times, but it fits the genre perfectly. And that's the perfect summary for this movie, really. If you like the first one and/or are a fan of the genre, even though it's not as good as the original, you'll enjoy this one. I give it three stars out of five.
at 9:01 PM
Labels: Bruce Willis, Dimension Films, Jessica Alba, Josh Brolin, Mickey Rourke, Reviews, Sin City; A Dame to Kill, The Weinstein Company