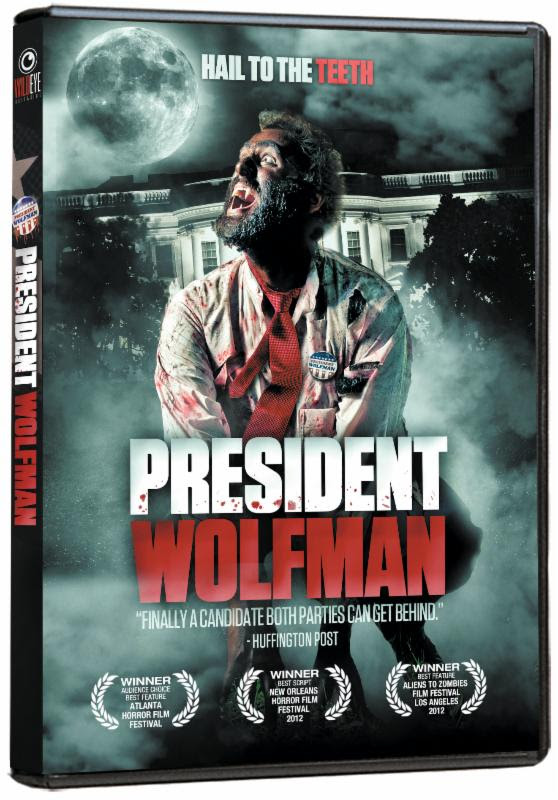 Washington. The White House. The President of the United States of America. Politicians. Statesmen. A Werewolf. If you think I'm talking about the 1973 public domain fun-fest "The Werewolf Of Washington", you're both wrong and right. As you can clearly see, this review is obviously about "President Wolfman", the second full feature of filmmaker Mike Davis - but it's not exactly a "real movie", it's actually a collage composed entirely out of 112(!) public domain features and stock footage films. A "green movie", so to say...

...and for the most part, they used footage from the above-mentioned "The Werewolf of Washington", a movie about the President's press assistant who gets bitten by a wolf and transforms into a werewolf. Instead of keeping this story, Davis re-cut the whole thing, re-dubbed it, added tons of other footage and eventually turned the press assistant into a Lycanthropic President who now tries to stop the USA being sold to China!

It's like MST3K or Rifftrax trying to do a remake of Woody Allen's "What's Up, Tiger Lily?", but without the genius humor of Allen. The basic idea of cobbling up a movie of publicly available footage is fun, and I have absolutely no problem with it. However, I'm a huge fan of Milton Moses Ginsberg's debut feature "The Werewolf of Washington" which I consider one of the most underrated, yet most amusing political satires I've ever seen. It's far from being perfect due to obvious low budget and some really horrible special / make-up effects, but it's entertaining enough to make me re-watch it on a regular basis 1-2 times a year...

...and unfortunately, it's also far more entertaining than "President Wolfman", not a bad film, but... well, not exactly good either. In terms of editing, it's simply marvellous. I have no idea how long it took until the whole thing was finally finished, but I assure you, it must've been one helluva lotta time. Hundreds... no, thousands of clips put together in a way, as if they've always been connected to each it other. All very well developed, very well crafted.

However, even though the dubbing is excellent, Davis' humor is rather poor. There are a lot of scenes and dialogue that made me laugh, but most of the movie consists of stuff that is either mildly funny or not funny at all. I loved all original stuff, like the "CHIMERICA" advertisements (paid for by "Americans for a Better Future after America"), the surgeon who removes Canines' heads and keeps them alive without the body ("I have now successfully determined that the animal requires less care than a traditional Canine!"), several hilarious lines ("Good news, Mr. President. You're a fucking Werewolf." / "The President promised a change, but not into a fucking Werewolf!" / "No one messes with President Wolfman. Hail to the teeth!") and a super-funky title song ("Up for election / Natural selection / Got no protection / Only affection").

As for the rest... meh. Due to a huge amount of jokes and gags that just don't work, "President Wolfman" becomes dull and boring rather quick. Even though it's only about 75 minutes long, it feels much too lengthy and much too long-winded. 25-30 minutes would have been enough. Also, it's a tragedy how the funniest scenes of the source material got turned into dialogue-heavy and frustratingly unfunny re-dos. The bowling sequence, the toilet scene, the helicopter finale - all uber-hilarious in its original form, all underwhelming and annoying in its re-dubbed form.

If you haven't seen "The Werewolf of Washington", you will probably end up having a great time with "President Wolfman" - but if you're a fan of the original, it might be better to avoid the "new version".
at 2:31 PM
Labels: President Wolfman, Reviews, Wild Eye Releasing