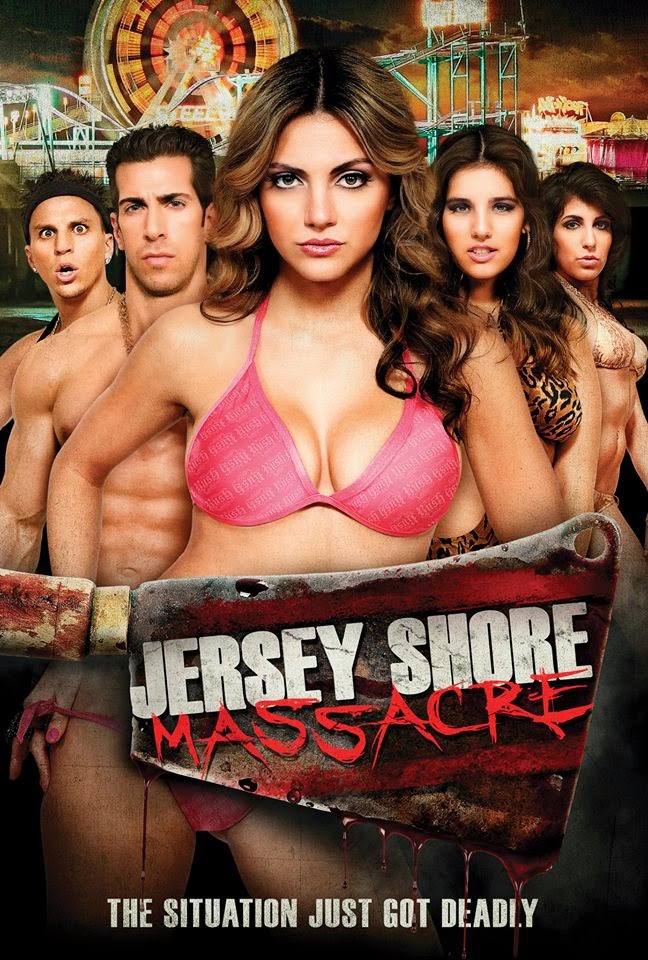 “Jersey Shore Massacre” is follows a group of girls, who leave their salon to have a fun filled weekend filled with hot weather and fun on the jersey shore. During their fun, they meet a bunch of guys. They head back to their rented house after getting kicked out of a nightclub, but what’s waiting for them is a psychotic killer. Now, he killing everyone off, as everyone tries to find a way to survive his deadly rampage.

One of the things that makes this surprising good was its direction. Writer/director Paul Tarnopol does a very good job with the way that he handles the film’s death scenes. Whether it was in the screenwriting process and/or his direction, the scenes were graphic and creative enough to shock you. It made the horror elements work so well that it makes you forget that this is a “Jersey Shore” horror knockoff. The other thing that makes Tarnopl’s direction was to get the performances to work well. He does that here as I enjoyed them considering they came off as annoying. But there was purpose for that, as it had to fit the tone that this film was going for its characters. It made some very interesting performances. One last thing about direction of the performance. I liked how he uses his cameos from adult film actor Ron Jeremy as a landlord and Sal Governale from the Howard Stern show as a Vanilla Ice knockoff. They bring some humorous traits to their characters. It helped add something to the film, as I enjoyed both of those cameos.

The screenplay written by Tarnopol does a good job with the way he handles the humor. I liked how he did spoofed “Jersey Shore” here. Whether it’s the way he came up with the dialogue to the way that he gave certain characters mannerisms, it comes off as funny. That’s what make the characters likeable even though they were annoying too. The other thing that I liked about the screenplay was the way that Tarnopol uses the horror elements to create action that is gory and shocking. This film was very gory, as he does a good job with the way that he creates everything. They came off as creative and effective then something that has been done before. I liked it, when there is thought to them as it makes those scenes standout.

The Blu-Ray extras starts off with the film’s behind the scenes featurette. It features behind the scenes footage along with interviews from some of the film’s cast and crew. Overall, this was a good featurette that went into the making of the film. Next on the Blu-Ray is the short film “Fat Camp Massacre Part 1”. Sadly, this wasn’t a good short film as the characters weren’t interesting and didn’t have the fun factor like “Jersey Shore Massacre” did. Finally, the disc wraps up with “Bigfoot Unleashed”, 2 Music Videos and a trailer for the upcoming DVD and Blu-Ray release of “Girls Gone Dead: King’s Cut Deluxe Edition”.