"I'll Follow You Down" Blu-Ray Review - Written by Abraham Phillips 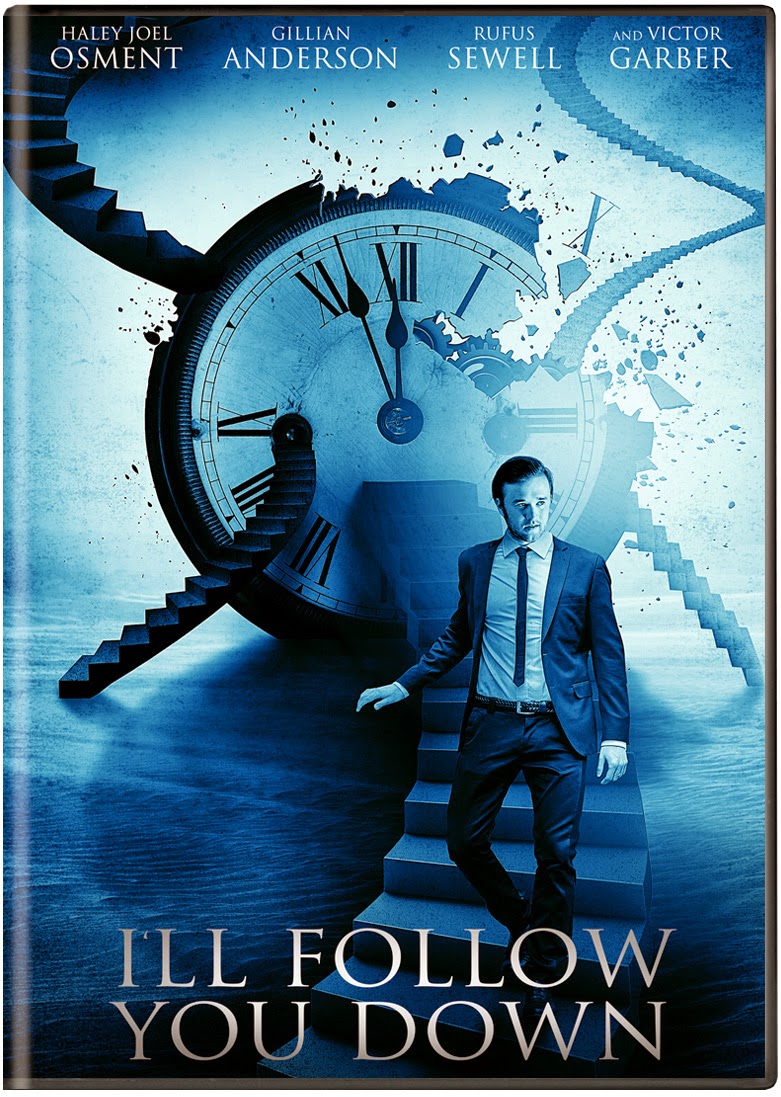 Plot: After the disappearance of a young scientist on a business trip, his son and wife struggle to cope, only to make a bizarre discovery years later - one that may bring him home.

Yes you read that right starring the little kid from The Sixth Sense all grown up and showing his master acting skills as a grown up. Always been a huge fan of his. He is such a gifted believable actor that shines in all his roles. The Sixth Sense will always be one of my favorite films and plus he phrased one of the iconic movie quotes of all time “I see dead people.” Here he takes the trip as the character Erol into a science fiction setting. An interesting time travel story that I feel works for its unique and interesting approach on the concept of time travel.

This builds interesting characters and also a back story of those characters as you see the story unfold. A wonderful cast of actors. The beautiful amazing talented and all around goddess Gillian Anderson. I grew up watching her in The X-Files but she is so much more than an old television show. Her acting is extraordinary in such awesome performances as the violent revenge film Closure (2007) and the BBC made for TV series Bleak House and her top notch award worthy performance of Miss Havisham in the BBC’s Great Expectations (2011) which I feel is the greatest representation of Miss Havisham ever done. She is golden in I’ll Follow You Down as the character of Marika.

This also stars the wonderful master talent Rufus Sewell who I absolutely fell in love with in the very underrated dark sci-fi Dark City (1998). He also was brilliant as Dr. Jacob Hood in the awesome short lived TV series Eleventh Hour. He has such a smooth reality to his acting that creates awesome characters even if the movie sucks. He plays the character of Gabe in I’ll Follow You Down and he owns the part and makes you believe.

This also stars the very gifted and underrated actor Victor Garber as Sal. He is always a treat to watch and I have always been a huge fan. Loved him in the awesome TV series Alias.

Also starring the beautiful Susanna Fournier. She is probably best known as the character Zoe on the TV series Being Human. She shines in I'll Follow you Down.

I’ll Follow You Down is a story driven and unique one of a kind film with a thick, thinking plot that mixes the old storyline of Time Travel, but expresses it in a whole new fashion and creates it in a somewhat odd and believable reality. The family and emotional dynamics of the film is what expresses its beauty.

Now to describe the film, your main character Erol lives with the idea his father Gabe left him as a child. Gabe’s vanished. His driver’s license and phone where found in a motel room. No trace of Gabe or what happened to him is known. He seemed to vanish off the face of the earth. Erol is now grown, an adult. He has followed his father’s work of physics. He is a gifted scientist that many colleges want, but Erol does not want to leave his mother because she is in a fragile mental state. After Gabe vanished she has tried to commit suicide twice and Erol has taken it upon himself to be her rock and protector.

Now add the grandfather Sal who has been studying and seeking out the truth of his son’s work and ultimate vanishing. Now Gabe was working on a Time Travel Experiment before he vanished. So Sal joins with Erol in hopes they can figure out the experiment and try and solve the ultimate reality of just what happened to Gabe.

One of the best parts about the film is the ultimate chemistry between Haley and Susanna. Their love affair and relationship is very beautiful in that it makes the viewer sense that it's a real relationship. Their chemistry is golden on screen. They act out their friendship and relationship with perfection.

I think this film touches on the reality of how true family and loved ones can ultimately change and also alter the dynamics of family life. The personal love and also destruction that one can cause. I think this film works in a fresh idea of science fiction that explores the family reality and also the ultimate conscience of messing with certain things. I enjoyed this film for the little moments you don’t expect.

The somewhat shock moments of twisting the plot into a spiral, because just when you think you know what’s happening it alters itself and gives you that shock moment. I loved the acting, which every single performer was flawless at. The cast is so gifted and the chemistry between them works with every single actor on screen.

I felt this movie. I liked it. There are those that won’t like it or get it, but I feel this is film that shined in creating, yes, an old school concept of Time Travel, but created it in a new idea. Gave it a new approach and let the story and the acting play out on screen so that the viewer could become a part of this unfolding science fiction, yet science fact film.

This is written and directed by relatively new comer Richie Mehta. He did, in my viewpoint an amazing job in capturing and creating a story of logical science fiction, or better put, smart science fiction. It’s written in a way that Ray Bradbury or Philip K. Dick would create. It has that logical yet fanciful at times approach. This is like an amazing long episode of the Twilight Zone written by Rod Sterling.

Blu-ray EXTRAS are a Behind the Scenes feature. Deleted Scenes and the Trailer. All the extras are just another beauty to this film.

This is not geared for everyone but for those who like an interesting sophisticated science fiction with a twist of mystery and ultimate drama then I feel it owns what it was detailing and also entertained me and crafted itself in a fashion that would leave a lasting memory, and that’s all I ask for.