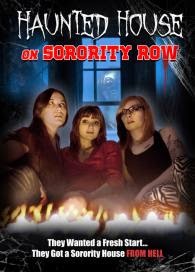 It’s been a while since I’ve reviewed a release from Alternative Cinema. But what made me interested in this film was the fact that this was directed by Henrique Couto, who directed the dark psychological film “Bleeding Through” last year. By liking that film enough, it made me interested in checking "Haunted House on Sorority Row".

The film follows four friends who move into a house with a haunted past, as they plan on starting a new sorority. What they find out there is something sinister that’s lurking around the house and in the shadows. Is it something supernatural or something that wished to do harm to the women. Soon, they are forced to confront their dark secrets as the haunting force knows all of them and is willing to use them to try and tear them apart.

It’s been a while since I’ve watched a haunted house film that focuses on ghost hauntings. Sorry, “The Perfect House” doesn’t count, since it more slasher than supernatural. Going into this film, my thinking was this was to be one of those films to the point that I was going to be bored with it. But I still wanted to check this film out, since I liked the film’s trailer online a lot. Thankfully, I decided to check “Hunted House on Sorority Row out as I really enjoyed this film.

One of the main reasons that makes this work so well was the film’s direction. Director Henrique Couto does a very good job with the way that he handles his direction. Whether it was the way he get the effects came off well to the way the film was shot and looked, it had creepiness tone to it. This made all the horror aspects on screen look creepy. It’s important to have that with films that deal with ghostly horrors. The other thing that Couto does very well was the way that he directs his cast. The cast here was very good, as they really had good chemistry with each other and their ability to play off from one another. It made me interested in the performances and each of their characters. Good direction on the performance aspects like this film here has can make micro-budget film entertaining.

The screenplay written by John Oak Falton was very good. One of the things that he does very well was to build tension to some of the film’s haunting scenes. He does this very well, by not rushing into any sort of action. Instead, he takes his time starting off with some jump scares. By doing that, it allows the viewer to get into the film and it makes some of haunting action later in film feel creepy and scary. Also, the screenplay takes its time developing the characters. Whether it the introduction to the characters to reflecting on their personal fears through the various haunting that place, it helps with developing each of them and makes them interesting and engaging. This is what also really helps make the horror aspects work so well because it deals with each of the character’s past while providing some scary moments. The other thing that Falton’s screenplay does well was that it had an ending that wasn’t predictable. I can’t go into it, as I don’t want to spoil it. It was one of those films, where I thought it was to going to go one way but went the other way. Thankfully, it didn’t go that route.

This is a very good haunted house film, as it had a “House of Sorority Row” tone to it. With its good direction and good screenplay, “Haunted House on Sorority Row” is haunting entertainment.